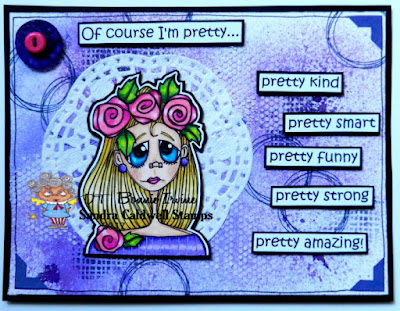 Hi everyone. It's New Release Friday at Sandra Caldwell's Etsy shop and Facebook group. Each week she introduces us to the newbies in the shop and gives the DT a chance to play with them. She always adds a few surprises to the shop so that the DT will be surprised, too. This week, my art journal page is featuring the new image called 1567 Victorian Pretty. I chose her because of that long flowy hair and the pretty headpiece. She was a treat to colour. 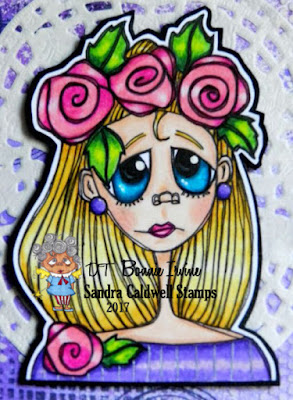 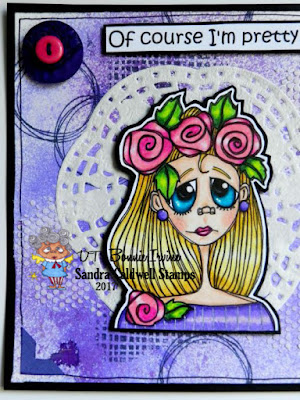 The background began as a 6 x 8 inch rectangle of mixed media paper. Lindy's Witch's Potion Purple and Sweet Violet Purple Teal Starburst Sprays were spritzed over it and allowed to dry. One of the Ellen Hutson Bokeh Dots as well as Carabelle Studio Quadrillages stamps were applied to the background using Hydrangea Archival Ink. Ranger Texture Paste was scraped through TCW Tiny Circles stencil to add a little more texture. Before VP was adhered to the background, a small doily was glued behind her both to pretty up the page to suit her and also to help her stand out against the background. 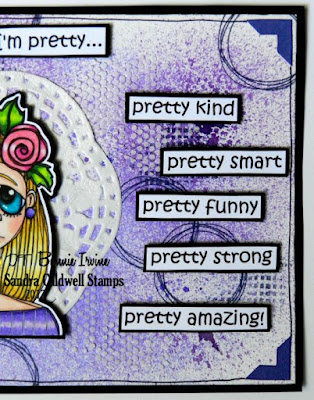 The sentiment was printed on white card stock and cut into segments. These were then matted with black card stock and popped up on foam tape. A small pink button and a large patterned purple button were stacked and threaded together to place in the top left corner. Three photo corners were punched from purple card stock and glued to the remaining corners. A simple line border was drawn to join the four corner elements. Black Big Brush Pen was used to edge the page before a black mat was added to frame the page.

Thanks for joining 1567 Victorian Pretty and me today. To see more of Sandra's new releases, be sure and pop by her Etsy shop, babycakesdnd. Stop off at the Sandra Caldwell Stamp Fans Facebook group to see the awesome projects featuring these new releases created by the DT members. Lots of inspiration to be found in both places.