Check Your Attitude ~ inspired by a Vera Lane Studio image 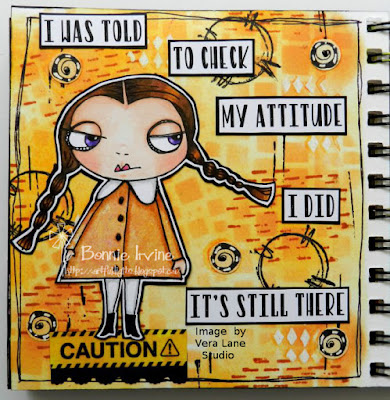 Hi everyone! Happy Saturday! I had fun creating a page in my art journal using the image by Vera Lane Studio called Wednesday and Pugsley since she has the perfect expression for the saying I wanted to illustrate. She comes with her brother, Pugsley but he will star in his own page at a later date. 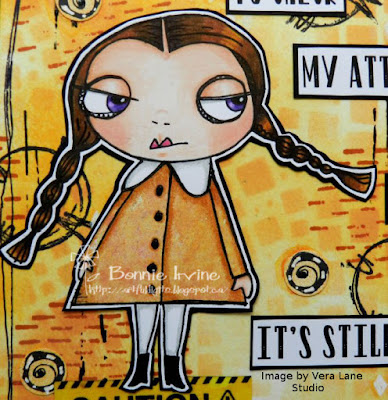 I coloured Wednesday with Prismacolor and Polychromos pencils. Her dress was paper pieced using a piece of left over cardstock which had been spritzed with Lindy's Starburst sprays for another project and then shaded with Polychromos pencils. The buttons were added with Ebony Black Nuvo Crystal Drops. Wednesday was then fussy cut leaving a narrow white border, matted with black, and fussy cut a second time leaving a narrow black border. 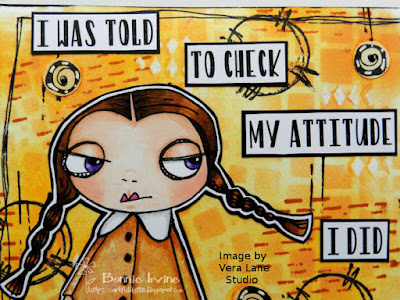 The 6x6 inch watercolor paper background was colourized with Carved Pumpkin Distress Oxide Ink. Rusty Hinge Distress Oxide Ink was added through Carabelle Studio Mosaique stencil. Orange Blossom Archival Ink was used to apply one of the stamps from Carabelle Studio Grungy Patterns set (Kate Crane). Jet Black Archival Ink was used to add one of the circle stamps from the same Kate Crane set. More texture was added when white gesso was pounced through the harlequin design from Stamperia Steampunk Man stencil. Inktense pencil was used to shade to the left of the diamonds to help them show more. 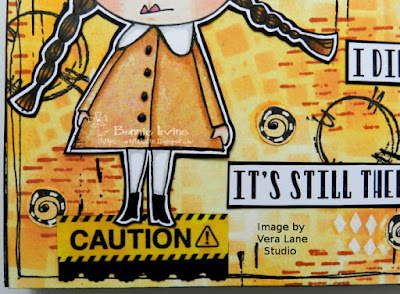 Before Wednesday was adhered to the background, a length of washi tape was adhered to the same background as her dress to change the bright yellow to a colour which would blend a little better. This tape was then adhered to a punched scallop border and placed under her feet to ground her. A spiral stamp from Rubber Moon called Spiralstract was applied to white cardstock several times using Jet Black Archival Ink. It was then cut out using a .5 inch circle punch and Carved Pumpkin Distress Oxide was used to tint the background. The white sections were highlighted with Posca Pen and the center dot was plumped up with black Nuvo Drops like her buttons. These were then scattered around the page to add more pattern and whimsy. 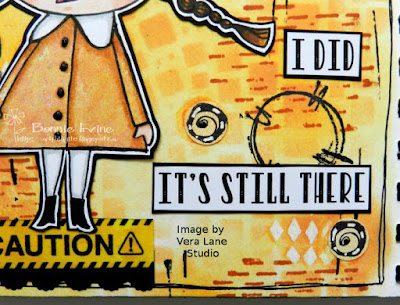 The wording was printed onto white cardstock, cut into sections, and matted with black. A scribbly border was doodled around the outside of the page and black Big Brush Pen was used to remove the white edges.

Thanks for joining Wednesday and me today. I'm happy you did that and Wednesday...well, she has an attitude...LOL. Be sure to check out the other fabulous images in the Vera Lane Studio Etsy shop and pop by the Facebook group where there is wonderful new inspiration daily.