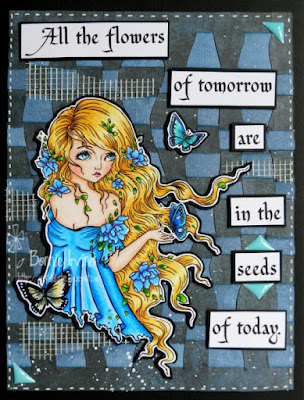 Hi everyone. It's Week 20 of the Joggles Art Journal Adventure and since yesterday was National Blueberry Cheesecake Day, our prompt today asks us to use the colour blue, or feature blueberries or a dessert. I decided to use as many shades of blue as I could and still come up with a page I liked. I also decided to use a paper weaving technique for my background from a YouTube Tutorial by the talented Paula Foerder. I love her videos and always come away inspired and having learned something new. 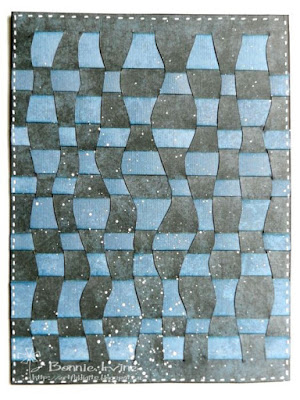 I have an abundance (!!) of designer paper which I want to start using up so I decided to use two relatively plain pages in two different shades of blue. One became the background which I sliced into wiggly lines and the other I cut into different width strips for weaving. I won't go into the details of this because Paula's video is very clear and explains the steps well. Once the weaving was finished and the ends glued in place, I spattered the page with white gesso and used a white paint pen to doodle faux stitching around the edges. I didn't want to do much because I wanted the weaving to show. 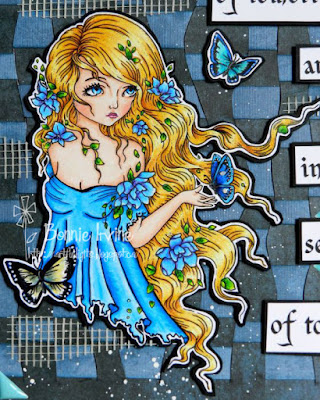 The image, called So Long Yesterday by Ching-Chou Kuik, is the most challenging digital stamp I have coloured in ages. It took a while and some thought but I enjoyed the process. She was coloured with Polychromos and Prismacolor pencils. The butterflies were decorated with paint pen and Nuvo Drops and given a swipe of Wink of Stella to create shimmer magic. She was fussy cut leaving a narrow white border, matted with black, and fussy cut again leaving a narrow black border. Foam tape was used to pop her up off the background. 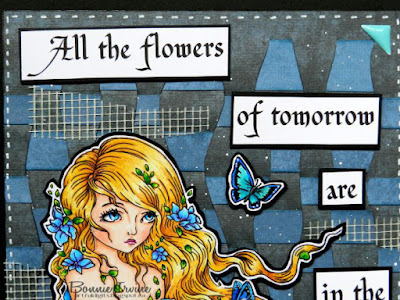 The wording was printed on white cardstock, matted with black, and popped up with foam tape. To break up the darker background and add more texture, pieces of drywall mesh were adhered in 5 places using Matte Medium. 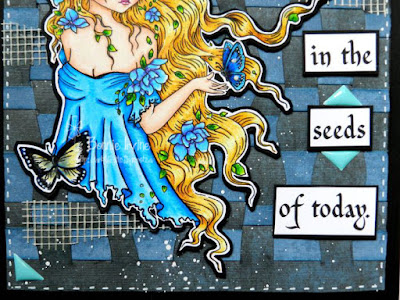 Puffy blue triangle stickers were added to opposite corners and above/below the word "seeds" to pull a little of the turquoise from the butterflies into the background. They also add pops of bright colour to contrast with the darker blues. The page was darkened around the edges before it was adhered to the black background common to all pages in this journal.

Thanks for joining us today. We appreciate that. To check out the other responses of the members of the Joggles Art Journal Adventure Facebook group, be sure to pop round there throughout the week. We would love it if you decided to play along with us.