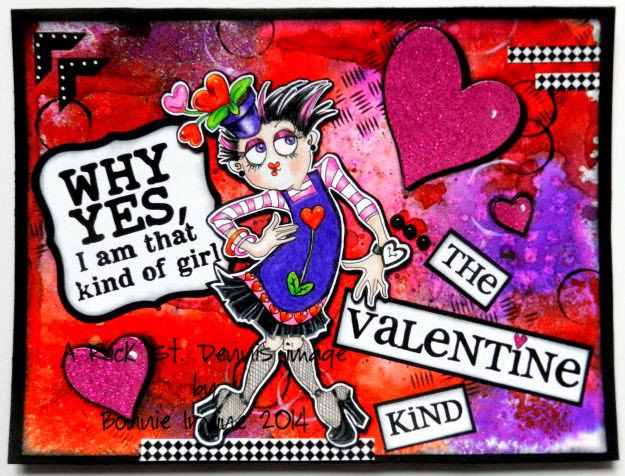 Hi everyone. Today is the RSD Showcase on the Sparkle and Glitter blog and our theme is Valentine's. Rick St. Dennis has so many wonderful Valentine images  from which to choose but I am particularly smitten with these quirky Valentine girls that he recently released. Today I chose to play with Charlotte Chic Valentine Girl who can be found in Rick's Zibbet and Etsy shops. 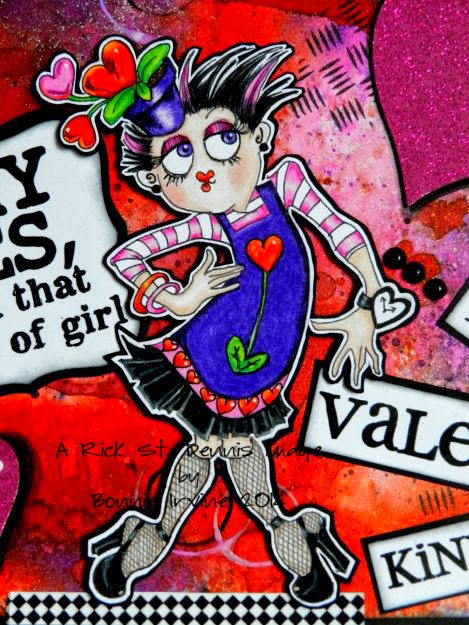 I coloured Charlotte with Prismacolor pencils, adding some metallic silver gel pen dots on her eyelashes because she's that kind of girl, too. It's all about style for Charlotte. I fussy cut her leaving a narrow white border and then matted her with black cardstock before popping her up on foam tape. 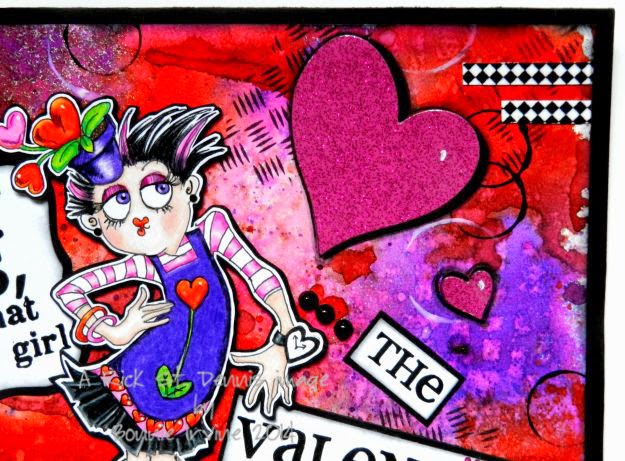 The background began as a 6x8 inch piece of mixed media paper which I needed to use to stand up to the wet inky layers I knew I would add. I sprayed the paper with water, and then spritzed it with Postbox Red, Crushed Grape, and Funky Fuchsia Dylusions sprays. Once dried, I dipped the background into the leftover sprays on my craft sheet a few times, drying in between each time. Once I was satisfied with the depth of colour and drips/splatters, I misted it again with Tattered Angels Iridescent Gold to create shimmer appropriate for this fashion diva. The Dylusions bricks stencil was spritzed through with the same three colours I started with for extra pattern and texture. 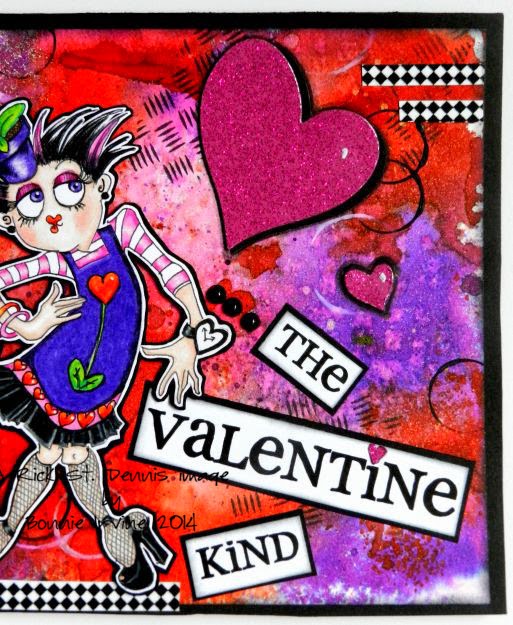 Some background stamping was done with Jet Black Archival ink and a clear pattern stamp. Circles were added with black and then white gesso using a couple of lids as the stamps. Washi tape applied to white cardstock was added to where Charlotte would stand as well as to the side. Two punched photo corners were dotted and added to the top left corner. 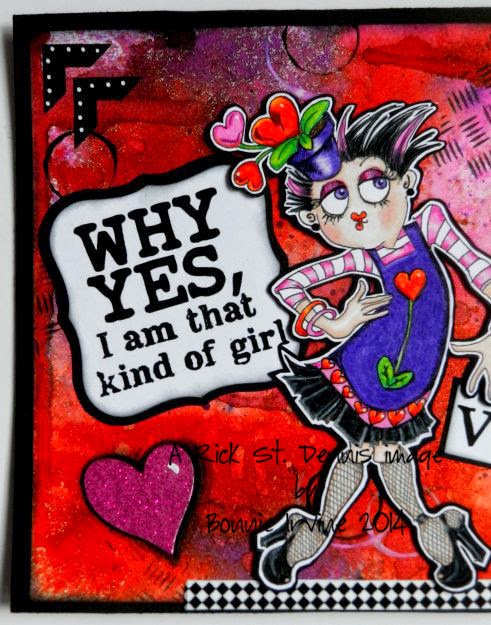 Once Charlotte was placed, the sentiments (one from Create With TLC and the other computer generated) were printed on white cardstock. The lengthier sentiment was cut with a die. Both were matted with black and adhered to the background. Three sizes of hearts were die cut from shimmery paper and then matted in black. The tiny one over the i in Valentine was hand cut and added without the mat. Three flat black pearls were added to lead into the second half of the sentiment. The hearts were shaded around with a Stabilo pencil activated with a water brush. To frame the spread, black cardstock and plain chipboard were added to the back adding strength as well as contrast.

Thanks so much for stopping by today. Charlotte and I are delighted that you did. When you get a minute, check out the Sparkle and Glitter blog to see Aletha's incredible project using another of Rick's wonderfully quirky Valentine girls.

I think this is magnificent! I love the depth of colour and dimension on the backgroud. Charlotte is a very sassy lady and you've coloured her beautifully. Love the words too! Great work.

Your work is always magical, Bonnie! Love this and I am rather fond of purple and red too. Your mixed-media pieces are continually inspiring.