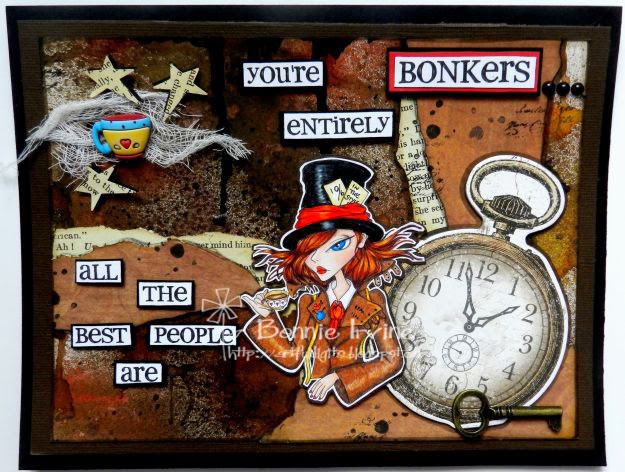 Today marks the beginning of the new Facebook Contest on The East Wind Facebook Community page. The theme this time is Alice in Wonderland and you must use an image from The East Wind to play along. The good news...there are so many images to choose from, some specifically an Alice character and some which could be coloured up to become an Alice image. I chose to create a mixed media spread using Lucy Loo Mad Hatter. I coloured Lucy Loo with my Prismacolor pencils and then fussy cut her leaving a narrow white border.She was then matted with dark brown cardstock. Foam tape was attached to the back to provide dimension. 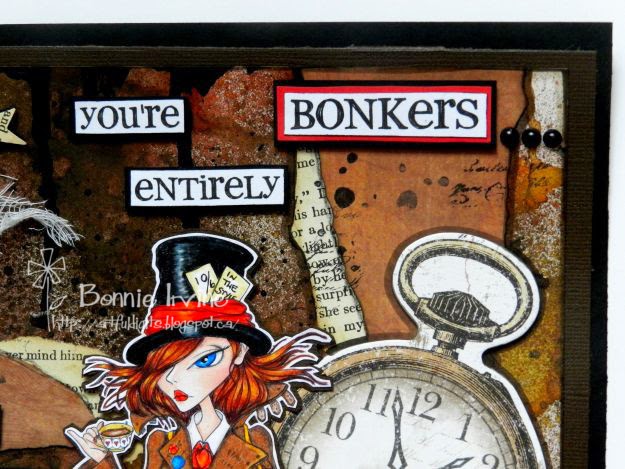 The background began as a piece of mixed media paper which I sprayed with Dylusions Melted Chocolate and Tattered Angels Yellow Daisy, Creme de Rouge and Tattered Leather. Black Ink was dripped from the top edge to create runs. A rust coloured pattern paper as well as very old book text paper were torn, edged with Distress inks, and adhered over the dried inks. Pattern was added with Jet Black Archival ink using text and scattered dots stamps. The outside edge of the background was inked with Dark Brown Big Brush pen. 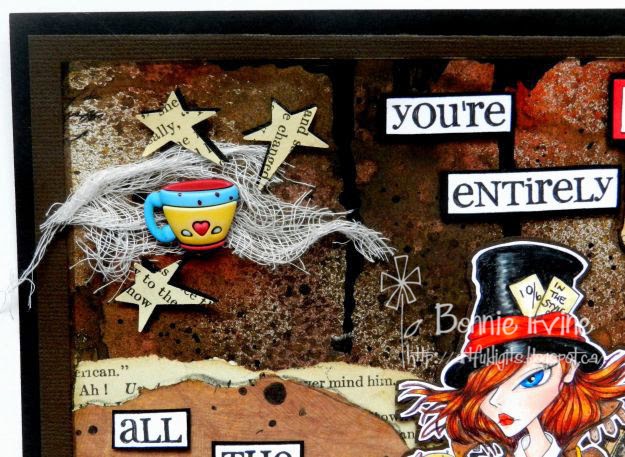 In order to further the Mad Hatter theme, I chose embellishments that reminded me of Mad Hatter scenes in A in W. The chipboard pocketwatch, From Bo Bunny, could have been either the Hatter's watch which the March Hare filled with butter or perhaps the Rabbit dropped it on his way through. The key could have been the one Alice used to open the door to Wonderland. The teacup is like the one Lucy has in her hand from the tea party and the stars remind me of the tune Hatter sang, Twinkle Twinkle Little Bat. I love weaving references and reminders into my mixed media pieces. 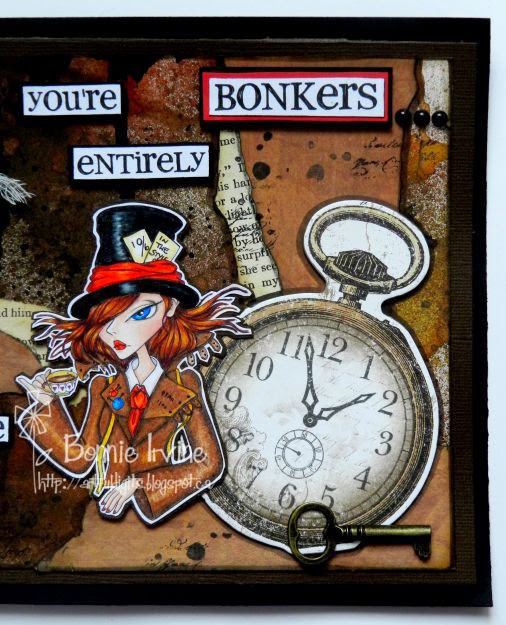 The saying which was computer generated is something Alice said to the Mad Hatter in the Tim Burton movie. Loved that line. So true! It was printed from the computer onto white cardstock. The words were cut apart, matted with black or red and black, and then popped up on foam tape. Three flat black pearls were used as periods to indicate that the middle of the quote is missing. To finish up and add strength to the piece, dark brown  and black cardstock were used as mats.

Thanks so much for joining Lucy Loo and me today. We appreciate that you spent time here. To see other projects from others on The East Wind DT, pop over to our Facebook Community page. We would love to see your take on this fun challenge, too. Hoping you will play along, too.

Hi Bonnie!
Great creation, i love this play with your colour choose! Thank you so much for joining my blog.
I'm your new follower on bloglovin.
Have a nice sunday!
HUGS SANDRA