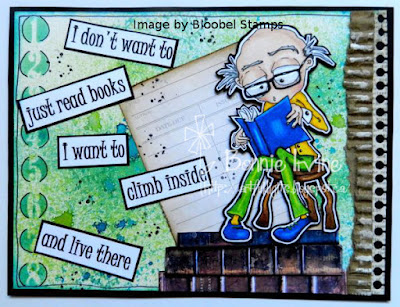 Hi everyone. I am an avid reader...have been since I was little. I read every morning when I get up, again in the late afternoon, and definitely before I go to sleep. I also love books...not a Kindle person. I like the feel of them, the smell of them, the weight in my hands...and old books, well, don't even get me started on them. When I saw Lisa's Bloobel Stamps image called Bookworm Bob, I knew he was a kindred spirit and I wanted to make him the star of an art journal page. 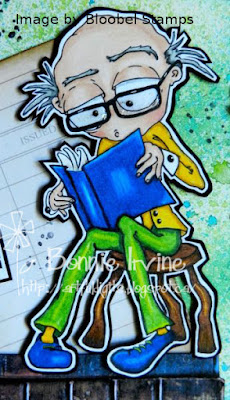 I coloured Bob with a mix of Prismacolor and Polychromos pencils and filled his glasses with Glossy Accents. He was then fussy cut leaving a narrow white border, matted on black cardstock, and trimmed out again leaving a narrow black border so he would stand out against the background.Foam tape was added to the back to add dimension and create a natural shadow. 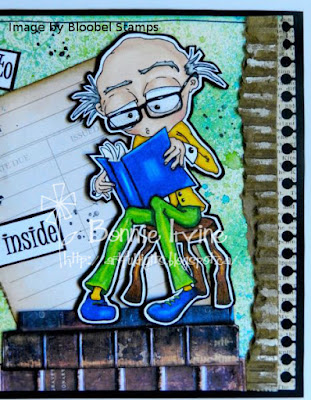 The 6 x 8 inch mixed media paper background was spritzed with Drop Dead Gorgeous Green, Tibetan Poppy Teal, and Delphinium Turquoise Lindy's Stamp Gang Starburst Sprays. Once dry, Joggles/ Margaret Applin's Vintage Correspondence stamp was loaded with Forget-Me-Not Archival Ink and rolled onto the background in several places. Stampotique's Funky Heart stamp was added to the page using Viridian Green Archival Ink. The same green was sponged through the numbers on Andy Skinner's Made to Measure stencil to create the border on the left side. A library card was printed and inked with Vintage Photo Distress ink before being layered behind Bob. To give him a place for his stool to sit, three images of old books were fussy cut and placed below him, the upper two popped up on foam tape. 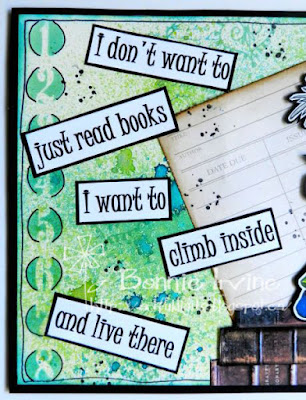 The sentiment was printed on white cardstock, trimmed out and matted with black before being adhered to the background. A doodled border and outlining were done with a black pen. A scrap of text paper was cut with a notebook edge die and adhered to the right side of the page. A torn piece of corrugated cardboard was layered over that and finger painted with white gesso. Black Big Brush Pen was used to edge the page before it was adhered to a black cardstock mat to frame it.As I often do, Jet Black Archival Ink was used to add splatter dot stamping.

Thanks so much for joining Bob and me today. Bob said he would be with you right after this chapter...but I've heard that before. LOL To see more of Lisa's amazing and inspiring Bloobel Stamps images, be sure to visit her Etsy shop. She also has a wonderful Facebook group where people share their Bloobel makes and keep up with the latest Bloobel news. Hope to see you there!

Life is good; so is art.
Bonnie
Posted by Bonnie Irvine at 07:37

LOve this one Bonnie! He is a delightful image and you have made him pop off this page - definitely the focus of my attention with your colors and 3D!
~ginny
RubberMAD