It's good to be queen ~ Joggles AJA Prompt 13 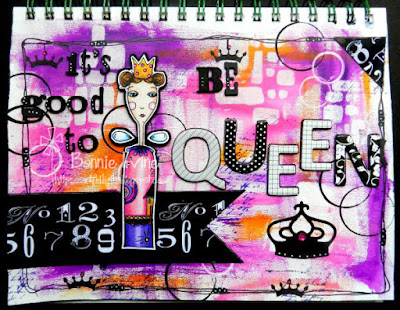 Hi there. I am behind with the weekly Joggles Art Journal Adventure prompts so I made some time to play today. Week 13's Prompt is to Illustrate a Quote. The one that I chose was from Mary Engelbreit and I used a Kate Crane stamp as my focal image. I love this stamp!! 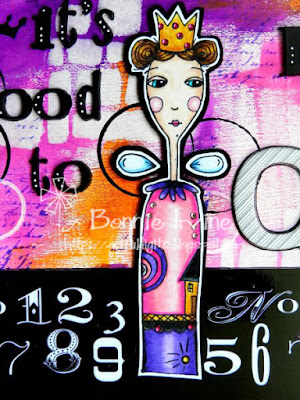 I stamped using Jet Black Archival Ink and coloured the Stampotique image called The Queen of Everything using Polychromos and Prismacolor pencils. The dots on the image were filled in with tiny rhinestones in two shades of pink. Her royal highness was then fussy cut leaving a narrow white border and then matted with black cardstock which was trimmed out again. She was then popped up on foam tape to create dimension and a natural shadow. 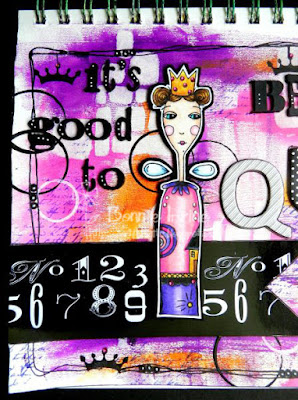 The background began much as Barb's did...with a gessoed surface and Dina Wakley Media Paint applied with my fingers. I changed the colours somewhat, using Magenta, Blackberry Violet, and just a touch of Tangerine. White gesso was pounced through Joggles Ancient Ruins Stencil in a few places using a scruffy brush. It took two coats to get the coverage I was looking for because the background colours are highly pigmented and vibrant. Joggles/ Margaret Applin's Vintage Correspondence Cling Mounted Rubber Stamp was loaded with Deep Purple Archival Ink and rolled onto the background in places to create texture. Paint rings were created with two sizes of bottle lids and Dylusions Black Marble or White Linen Paint. A length of printed Duck Tape was adhered to white cardstock and then cut into a flag shape before being glued to the background to give HRH a place to stand. The triangle cut to make the flag shape was adhered to the top right corner. 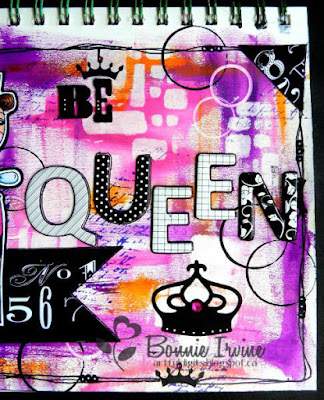 To create the border, a crown stamp was applied around the edge using Jet Black Archival Ink. A black Pitt Artist Pen was used to draw the wavering lines and the circles in some of the openings. A white paint pen dotted the center of each black dot. The lettering for It's good to be was done with Idea-ology Alpha Parts dotted with a white paint pen. The letters for Queen are from a chipboard set and were outlined with a black pen. All of the letters were adhered with Glossy Accents. A crown was die cut from black cardstock, dotted with white paint pen, and given a larger pink rhinestone as an embellie. Black Big Brush pen was used to edge the page as the finishing touch.

Thanks for joining the Queen and me today. We both are happy you did that. To check out all Barb's Art Journal Adventure prompts, be sure to stop by the Joggles blog where every Monday a new prompt and project are presented. You can also join our wonderful Art Journal Adventure group on Facebook. There are a lovely bunch of Adventurers and all kinds of inspiration there as well.

Life is good; so is art.
Bonnie
Posted by Bonnie Irvine at 15:22