Walk in the Rain ~ inspired by a Sandra Caldwell image 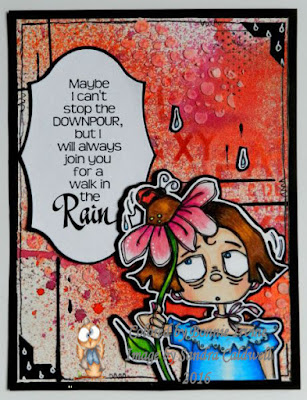 Hi everyone. We have been so fortunate this past week with unseasonably warm temperatures and sunny skies. Today it looks like we are going to get some much needed rain so my mixed media card is especially appropriate. As soon as I saw this adorable image from Sandra Caldwell's Etsy shop called April Showers 316, I knew I had to colour her. I love ladybugs and coneflowers...and the expression on the girl's face is too cute! 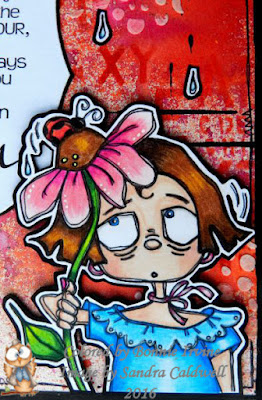 I coloured April and her friends with a mix of Prismacolor and Polychromos pencils. The three dots on the coneflower center were done with yellow gel pen to give them a bit of dimension. The image was fussy cut leaving a narrow white border including the single raindrops above her head. The pieces were then adhered to black cardstock and a barrow black border was left when they were trimmed out again. This gives the image more visual weight and allows her to stand out against the background. Foam tape was used on April, the flower and ladybug. The raindrops were adhered flat to the background once it was completed. 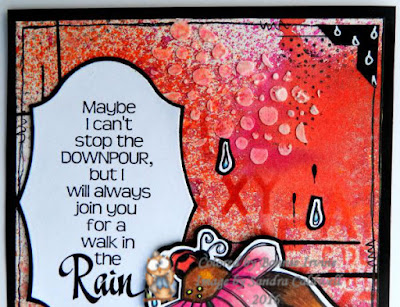 The background is done on a 4.5 x 6 inch piece of mixed media paper which was spritzed with Hag's Wart Orange and Hi Maintenance Magenta Lindy's Stamp Gang Starburst Sprays. A little water was added to help them blend and drip in places. Rocket Red Gold Brilliance Ink and Vermillion Archival Ink were sponged through Dylusions Letter Jumble Stencil to create texture here and there. Second generation stamping was done with Jet Black Archival and a dotty background stamp from Hampton Arts. I wanted this light so that's why I stamped off on scrap paper first.. Using the edge of an old gift card tapped into Dylusions Black Marble Paint, intersecting lines were created in a few places. White embossing paste was scraped through Dylusions Bubble stencil to create the raised circles. I love how they vary in colour as they pick up the Starburst Sprays underneath, 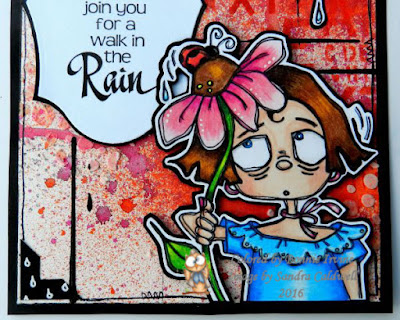 Thanks for joining April, her ladybug, and me today. You have definitely brightened up the gloomy gray sky and brought a smile to our faces. To see more of Sandra's fabulous images, be sure to pop by her Etsy shop called BabyCakes DND. You will surely be inspired!

Awesome card! The colors are terrific and I really love the sentiment.

Love this card Bonnie, so cute! Please check your email & FB messages I've been trying to contact you, thanks!

She's a charmer - and that inky background is just fabulous!
Alison x

This is so cool! Love the colours, sentiment and the image is just fab. Creative Blessings, Tracy x

Such an adorable image and sentiment. x