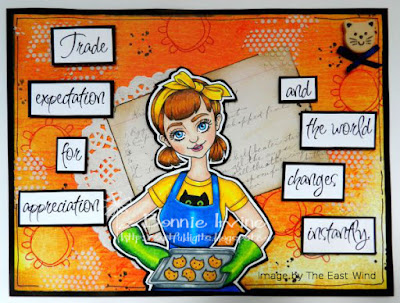 Hi everyone. It's Friday already and that means that there is a new release at The East Wind. Actually there are two new releases because Unky created an Aurora image and a background image which can be combined or used separately. The main image is called Aurora Little Baker and she is adorable. The background image is called Love Kitchen and is a fabulous retro style kitchen scene where Aurora can bake her cat cookies. 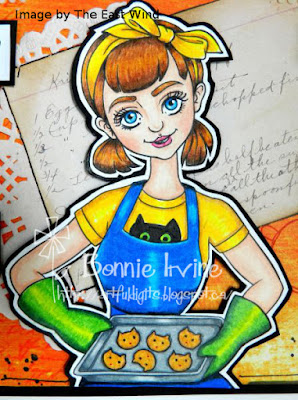 I chose to work with Aurora alone as I wanted to create a mixed media background for her. She was coloured with a mix of Prismacolor and Polychromos pencils. She was then fussy cut leaving a narrow white border and matted with black cardstock to create contrast with the background. Foam tape was adhered to the back to give her dimension and create a natural shadow. 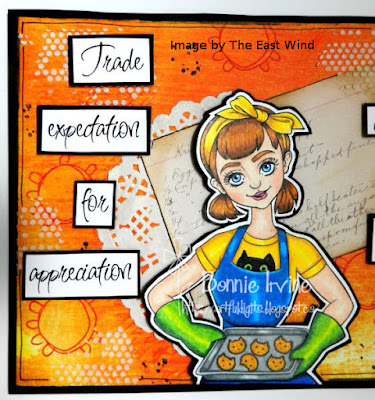 The background began as a 6 x 8 inch rectangle of coloured cardstock with some distressing near the edges. One of the Kate Crane Circles from the Stampotique cube was inked with Vermillion Archival ink and added to the background. A half doily and a copy of a vintage cookie recipe edged with Vintage Photo Distress ink were layered behind where Aurora would stand. White embossing paste was scraped through TCW's Mini Circles stencil in several places to create texture and blend the recipe into the background. Black speckled dots were added with a TH stamp and Jet Black Archival Ink. 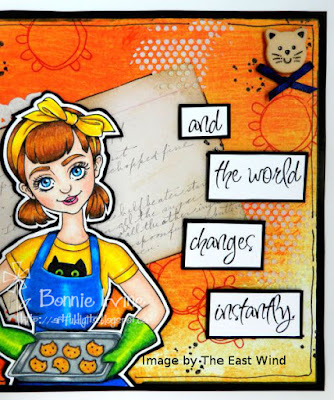 Once Aurora was added to the background, the sentiment was printed on white cardstock, cut apart and matted with black. Each section was popped up on foam tape and added to the journal page. A black pen was used to draw a wobbly border that stops and starts next to the embossing paste. A tiny cat button with the shank removed was adhered to the top right corner and a blue ribbon bow was glued below his chin. To finish the page, black Big Brush Pen was used to edge the background and a black cardstock mat was adhered to the back to frame the piece.

Thanks so much for joining Aurora and me today. We didn't expect it but we sure appreciate it :) To see what my talented teamies from TEW DT have created with this image, be sure to pop by The East Wind Facebook Group where the projects will be posted throughout the day.

Aurora is lovely, Bonnie, and so is the little cat in the corner. x