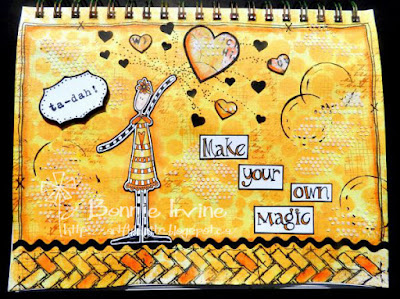 Hi everyone. I completed my art journal page for Joggles Art Journal Adventure Week 21 where Barb asked us to feature one main colour. The colour I chose was yellow...many shades of it from orange- yellow to a very pale creamy yellow. I often use yellow but rarely alone, usually combining it with pink and orange or using a complementary colour with it. 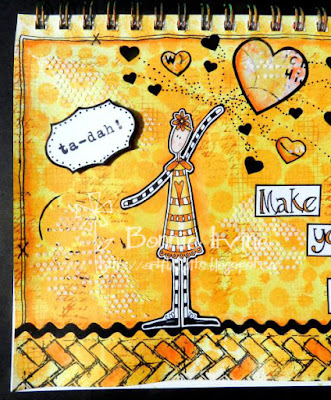 I started by spritzing the journal page with California Poppy Gold and Yellow Rose of Texas Lindy's Starburst Sprays. Without waiting for them to dry, I covered the page with Joggles Bubble Blast Stencil and spritzed through the openings with Marigold Yellow Orange Starburst Spray. The stencil which was covered with ink was then placed between two pages in another journal to give me a head start at another time. Once the background was completely dry, Stampotique Originals's Brick Road stamp was applied to the bottom inch of the page using Jet Black Archival Ink. Some of the bricks were darkened with Saffron Neocolor II crayon and that was spread with a water brush. My rubber stamp with the weaving pattern was inked with Pale Ochre Archival and rolled onto the background in places. The text was applied by stamping with Joggles/Margaret Applin's Vintage Correspondence rubber stamp and Orange Blossom Archival Ink. Ranger Texture Paste was scraped through TCW's Tiny Circles stencil with a palette knife to create more texture. To separate the brick road from the upper part, a rick rack border was die cut and adhered at the join line. 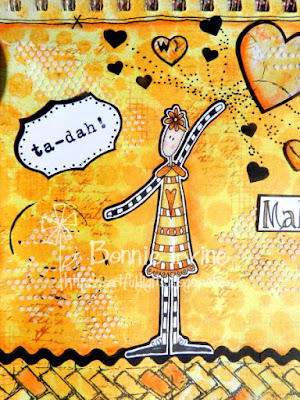 Ta-Dah from  Stampotique Originals was stamped with Jet Black Archival Ink onto white cardstock. The word stamp which comes with it was stamped on a separate piece. She was then coloured with a mix of coloured pencils and fussy cut leaving a narrow white border. Once she was adhered to black cardstock, she was fussy cut again and adhered to the journal page. 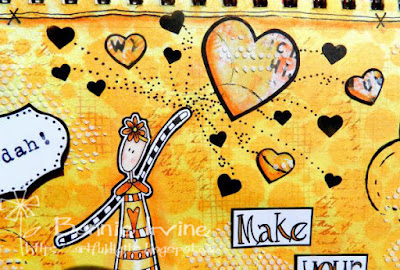 I used some of my heart Sticky Snippets to create the burst of hearts coming from her hand. The large one was the pre-cut shape from the sheet I used for this page. The small patterned hearts were stamped from the outside edges of the same sheet. Both the large and the small hearts were adhered to black cardstock and then adhered to the page. Small black cardstock hearts were punched and used to fill out the burst of magic. A black paint pen was used to create the dots from her hand to each heart. 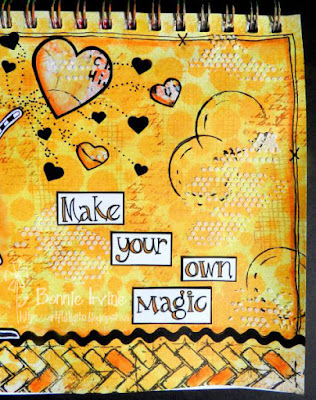 The stamped ta-dah was die cut into a label shape, matted with black, and dotted with black paint pen. It was then popped up on foam dots. The other sentiment was computer generated and printed onto white cardstock. The openings in the letters were coloured with pencil and then the words were cut apart and matted with black. A simple black border was doodled around the page to frame it. Next to that on the inside of the page, Saffron Neocolor II crayon spread with a water brush was used to deepen the colour. To complete the page, Dylusions Black Marble Paint was applied to a ring from the inside of a tape roll and then stamped in a few places. I wanted this sketchy like the dots to the hearts so I didn't apply much pressure when stamping.

Thanks for stopping by today. Miss Ta-dah and I are so happy you did. If you haven't already been following along with the Joggles Art Journal Adventure and Barb's weekly Monday prompts, it's not too late. You can join in at any point and we'd love to have you join our fabulous AJA Facebook group as well. It's been so much fun and we have an awesome group there.