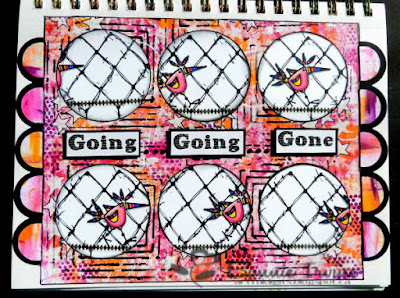 Hi everyone. I had a chance to play in my Art Journal Adventure book again today and I had a head start because I had already created a few mixed media backgrounds on Joggles Stick Snippets and featured one of them in another post. Barb's prompt for Week 20 was to use Joggles Sticky Snippets or Create Shapes Within Shapes. She used the "outies", the backgrounds around the shapes which are still covered with adhesive and are easy to apply to your journal page. The "innies" which are the shapes themselves, in this case 2.5 inch circles, will be used on other projects at some point. The first thing I did was cut the sheet between the rows of circles so that it fit my journal which is 7 x 10 inches. I then carefully peeled the outside section and placed it on my journal page leaving a white border around it. 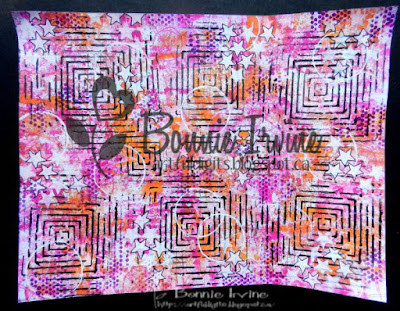 Above is the entire Sticky Snippets sheet which I covered with paint, stencilling, and stamping the other day. 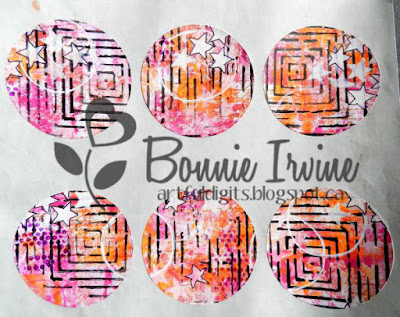 This is what remains on the backing after the outie part was removed and adhered to the page. I had no clue where I was going to go next or how I wanted to use the white openings. I did know that I wanted the background to stay white and the circles to be less busy than the mixed media part. I was picking up stencils and stamps when all of a sudden I got an idea which I absolutely loved...stamping the Stampotique Originals Strut Your Stuff bird so that he was walking into the circle and then frame by frame (or circle by circle) he was walking out of view. That idea made me laugh and that's all it took. 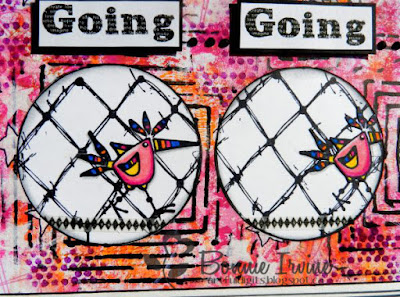 I was going to stamp directly on the journal page masking off the surrounding Sticky Snippets background. Instead, I hit the easy button and punched 2.5 inch circles from white cardstock and worked on those like mini canvases...no masking needed. The background was created using Stampotique's Upholstered stamp and Jet Black Archival. The strut your stuff bird was stamped with Jet Black Archival onto the Upholstered background moving him slightly into and out of the circles until only his behind and tail feathers were left. The bird was stamped again 6 times and coloured with Prismacolor pencils. Then the parts of him which were needed for each frame were fussy cut and glued over the background bird. This meant that I didn't have to fussy cut his skinny legs and the upholstered pattern didn't show on his body. 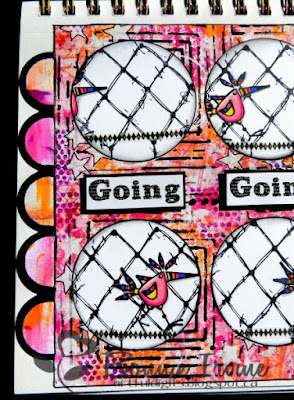 Before adhering the circles in place, they were edged with Black Soot Distress Ink and then Black Big Brush Pen to frame them. The inside of the circles were also outlined with black so no white spaces showed if my aim was slightly off. The outside edges of the Sticky Snippets were outlined in black before two scalloped borders were adhered to the sides. Small half circles were punched from mop up scraps and adhered inside the scallops. The sentiment was printed on white cardstock and the words were cut apart and matted with black. They were then popped up on foam tape and adhered to the journal with black gems acting as the dots in between.

Thanks for stopping by today. I thoroughly enjoyed this art journal adventure prompt and the opportunity to play with the background of the Sticky Snippets. They are quickly becoming one of my favourite things as I see how versatile they are. If you haven't already been following along with the Joggles Art Journal Adventure and Barb's weekly Monday prompts, it's not too late. You can join in at any point and we'd love to have you join our fabulous AJA Facebook group as well.

LOL! I love your sense of humor! Sitting here looking closely at your work and I just burst out laughing! I LIKE what you did with this 'outies' idea by the way - you are so creative!
~ginny
RubberMAD