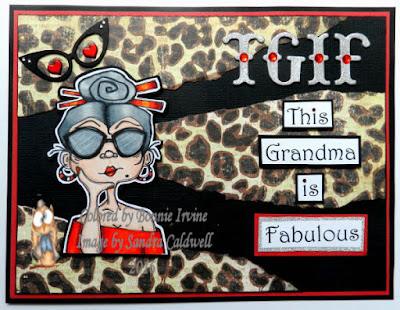 Hi everyone. I created an art journal page with an image that reminds me of my mom. It's partly the hairstyle and partly that she's dressed to the nines...something my mom always did but also because this woman, like my mom was, is fashion-forward and aware that age is just a number. I used to laugh when my mom was in her early eighties and used to talk about all the really old people in her condo. They were probably her age or younger but she didn't see herself that way. 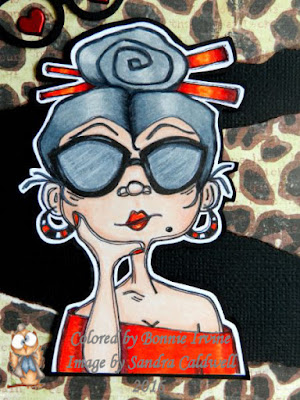 Anyway, the image is called Glamour Nana by Sandra Caldwell and I love her! I coloured Nana with a mix of Polychromos and Prismacolor pencils. She was fussy cut leaving a narrow white border and then matted on black cardstock before being popped up on foam tape. 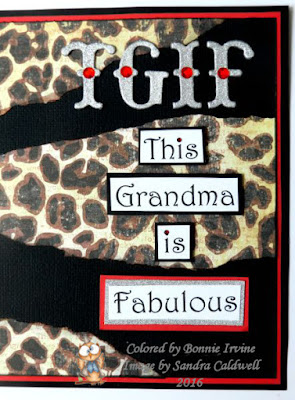 The background began with a 6 x 8 inch rectangle of black cardstock. I tore pieces of animal print cardstock and spaced them apart on the background. When my mom was in her mid eighties, she bough a leopard print blouse because she said it looked "jazzy" so I had to include that animal print in the background. The lettering for TGIF was created from silver glittery stickers to which I added red rhinestones. The rest of the sentiment was printed from the computer and the words were cut apart and matted with black. Tiny red rhinestones were used to dot the i in This and is. The word Fabulous was matted with the same glittery silver paper and then with red because I wanted it to really stand out as well as tie in with Nana's red top and chopsticks. 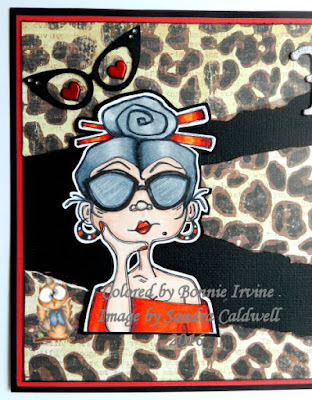 The tiny red cat eye glasses are made of wood. They were adhered to the top left corner and red heart brads were inserted in the lenses. Tiny clear rhinestones were adhered to the pointy bits for more sparkle and because that looks "jazzy", too. LOL To finish off the page, both a red and a black mat were added to the black base for contrast and to tie in that red from the rest of the page.

Thanks so much for joining Nana and me today. Not only did I love creating this piece and colouring the fabulous image by Sandra Caldwell but I also enjoyed the trip down Memory Lane. It all made me smile. To see more of Sandra's amazing images, be sure to pop by Sandra's Etsy shop, Babycakes Digis and Design (babycakesdnd). It's full of inspiration and Must-Haves!