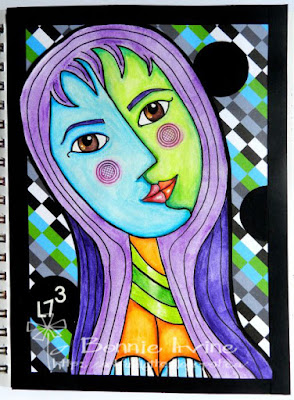 Hi everyone. I have been putting off this art journal page following Barb's AJA prompt for Week 28. Barb admires the Cubism paintings of Pablo Picasso so her prompt was to create something in that style either by replicating one of his or from your imagination. This prompt was so far outside of my comfort zone that I needed to pack a lunch to get there. I was excited to try it but I couldn't even begin to get an idea of what to do so I left it for two weeks. Today, I put on my big girl panties and decided to just do it! 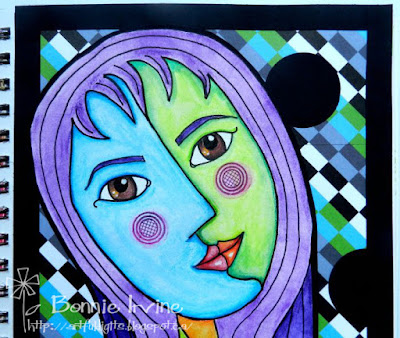 I pulled an extra piece of mixed media paper out of my art journal and drew the face on it, partly because I knew I had designer paper that would work for the background so I wanted to fussy cut her and partly because if I screwed it up, I could start over more easily :) In drawing the  Marlena's head (she told me her name), I didn't go as abstract as Picasso...abstract is not really my style. I did meld the two faces and created strong blocks of colour and shape as well as strong lines in the cubist style. I outlined everything with a Medium black Pitt pen, wanting my lines to be a little thicker. Once they were completely dry, I used a mix of Neocolor II crayons and Inktense pencils, activating the colour with a water brush. I wanted that kind of look rather than bold more opaque paint. I was able to shade with darker colours and used a white paint pen in a few places to highlight. 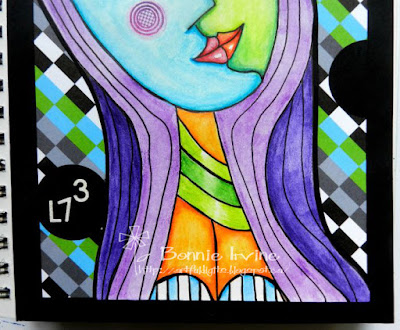 Marlena was fussy cut and the white edges were inked with black Big Brush pen. She was then matted with black cardstock and trimmed out leaving a narrow border to allow her to stand out from the background. The  designer paper comes from a stack of op art paper designs I found ages ago in the children's craft section of a store. I added a .5 inch border of black cardstock to frame the page and then set the image in place. Before adhering her, I punched three 1.5 inch black circles from cardstock and glued them in place allowing Marlena to overlap two of them. As I have mentioned before, I always like to add some text or at least a word of sorts to my art journal pages. I didn't want to distract from the simplistic style so I used glittery white stickers to say L73...a little reminder to me about the page's theme. When I was a kid, if someone called you L7 it meant you were square and the three refers to the exponent number for cubed (x3) so L73, to me, means square cubed. Yes, I know I'm a little odd :)

Thanks for popping by today. Marlena and I appreciate that. If you haven't already been following along with the Joggles Art Journal Adventure and Barb's weekly Monday prompts, it's not too late. You can join in at any point and we'd love to have you join our fabulous AJA Facebook group as well. It's an awesome group filled with creative and supportive people who share the same enthusiasm for this adventure.

Life is good; so is art.
Bonnie
Posted by Bonnie Irvine at 17:57

Bonnie love your Digi works. You mention often you use Prismacolor pencils and Polychrom pencils. Can you please tell me a bit about what you like about those and their characteristics. I haven't been a fan of regular pencils, but have been doing a bit of research and mainly have been following your color work and it is wonderful so I thought if you could enlighten me.
Thanks
Trish G