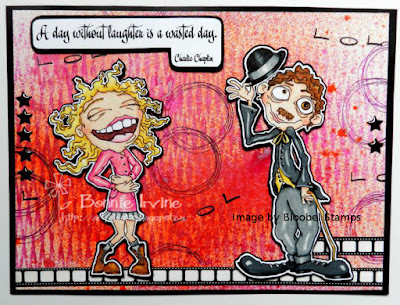 Hi everyone! It's been far too long since I stole time to create with Bloobel Stamps images. Even though this was a super busy week, I decided that I wasn't about to let another week go by without creating an art journal page with these two fabulous images. The one on the right is called Charlie and the one on the left is called Giggles. When I found the quote by Charlie Chaplin, who has been a favourite of mine since high school, I knew I had to combine them in a project. 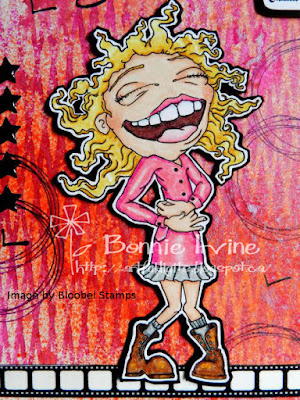 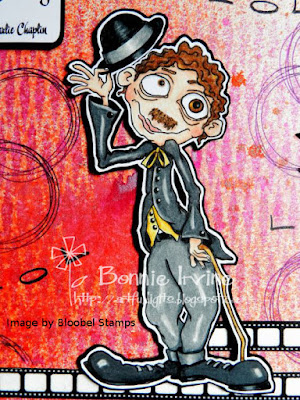 Both Charlie and Giggles were coloured with Prismacolor and Polychromos pencils. Both were fussy cut leaving a narrow white border and then matted with black cardstock. They were also both popped up on foam tape to create dimension and a natural shadow. 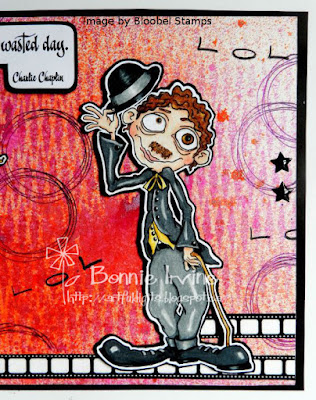 The 6 x 8 inch mixed media paper background was spritzed with Lindy's Stamp Gang Hag's Wart Orange and Hottie Patottie Hot Pink Starburst Sprays. After it was slightly dry, TCW's Elevator Gate Stencil was set on top and spritzed through with Hi Maintenance Magenta Starburst Spray. It wasn't quite big enough to cover the entire background so I flipped over the still inky stencil onto the part that was not stencilled. The letters LOL were stamped using Jet Black Archival Ink and a Penny Black Alphabet stamp set. Scribbly circles were stamped with Cactus Flower Archival Ink and an Ellen Hutson stamp called Bokeh Dots. Film strip washi tape backed with white cardstock was adhered in two pieces to form the ground line so Giggles and Charlie had a place to stand. 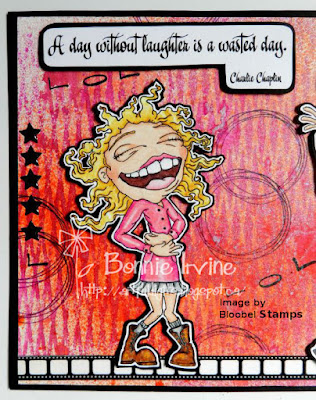 The sentiment was computer generated and printed on white cardstock. It was trimmed out, matted with black, and popped up on foam tape. Five enamel stars were adhered to the left side and another two on Charlie's side. Black Big Brush Pen was used to edge the outside of the background before a black mat was added to frame the page.

Thanks for stopping by today. Charlie, Giggles, and I really appreciate that. Be sure to pop by Lisa Graham's Bloobel Stamps shop to see more of her fabulous quirky images. They are sure to make you smile if not outright laugh out loud. She has the most wonderful imagination and off the wall sense of humour!

Life is good; so is art...and laughter!
Bonnie
Posted by Bonnie Irvine at 15:19