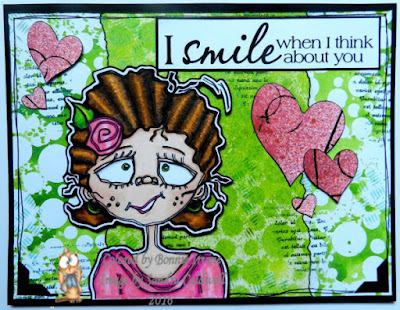 Hi there! I know Mondays are not everyone's favourite days but one good thing about them is that they are the day that Sandra Caldwell releases her new images and that's something to look forward to :) The new release which I played with this week is called Smiling Sue (793) and she can be found in Sandra's Etsy shop, Babycakesdnd, later today. I think she has the sweetest expression and I've been wanting to colour those Marcelle curls that I've seen others do because they look so cool. 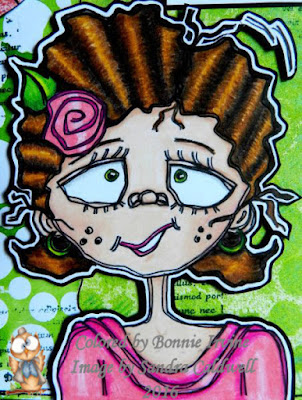 I coloured Sue with a mix of Prismacolor and Polychromos pencils. She was then fussy cut leaving a narrow white border. After Sue was matted on black cardstock and trimmed out again, she was popped up on foam tape for dimension. 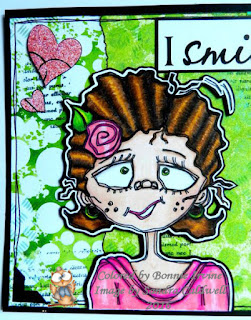 The 6 x 8 inch mixed media paper background was spritzed with Drop Dead Gorgeous Green Lindy's Starburst Spray. Joggles Bubble Blast stencil was placed over that and Freaky FrankenLime was spritzed through the stencil openings to create darker circles. Once the stencil, which was still covered in the left over spray, was removed it was flipped upside down on white cardstock to transfer all of that yummy colour. This gave the reverse pattern to what I just created. Once these two papers were dry, the white cardstock with the reverse pattern was torn and layered over the original paper on both sides. Viridian Archival Ink was used to stamp a subtle cross hatch pattern here and there and then Library Green Archival Ink was used to stamp Joggles Nonsense Latin Text  randomly. Three sizes of hearts were die cut from "mop up" paper which had also been decorated with left over paint. I keep these pieces on my desk to use for just this purpose. 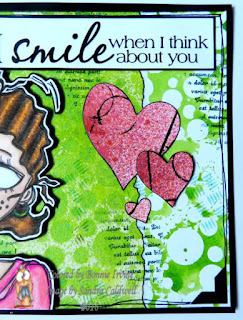 The sentiment from Create With TLC was printed on white cardstock and matted with black. The two added strips of paper were outlined to make them stand out and a simple border was doodled around the edge of the page. Two punched black photo corners were added to the bottom of the page. Black Big Brush Pen was used to outline the edges and a black cardstock m,at was adhered to the back to frame it.

Thanks for joining Smiling Sue and me today. We love that you came by. Be sure and pop by Sandra Caldwell Stamps Fans Facebook group today to see the other awesome new releases she has for us this week. They are delightful and the DT will post their creations with them throughout the day.

Oooooh Bonnie! LOve those Marcelle curls! I have to give you kudos - those are hard to do and time consuming, eh? I really like the floating hearts on that wonderful background too. Ya did good kid!
~ginny
RubberMAD