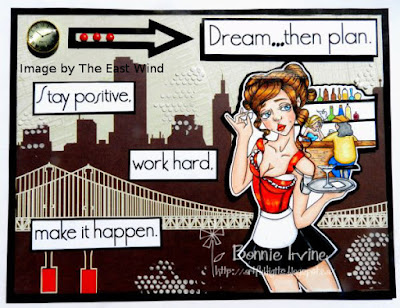 Hi there!Tuesdays and Fridays are the new release days at The East Wind shop and I got a chance to play with today's NR called Barmaid. I think all servers work hard for their money and have to put up with difficult customers and situations bars have maybe more of both. I love the expression on this barmaid's face. She looks frazzled and a little wistful like she is doing this job to pay the bills but has different dreams she wants to pursue. Maybe she wants to become a full time artist or run her own business. That was the story behind this creation. 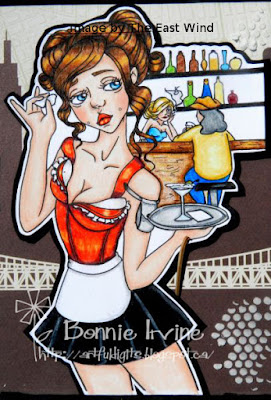 I coloured Barmaid with my usual mix of Polychromos and Prismacolor pencils. The image was then fussy cut next to her leaving a narrow white border and around the bar area where it made sense to me. It was then matted with black cardstock and trimmed out again before being popped up on foam tape. 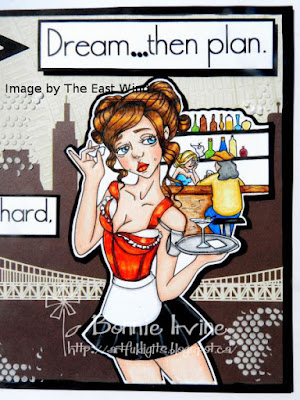 The background began with a piece of designer paper with this cityscape printed on it. It was cropped to a 6 x 8 inch size, edged with black Big Brush Pen, and matted with black cardstock. White Texture Paste was scraped through TCW Tiny Circles stencil with a palette knife to add a little texture. 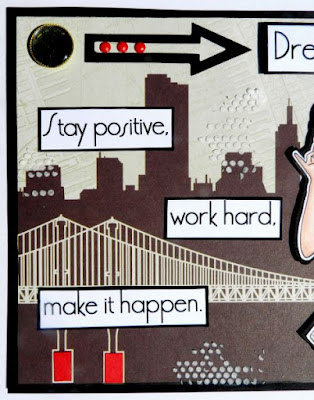 The sentiment was computer generated, printed on white cardstock, and matted with black cardstock. Three tiny black gems were used for the dots between Dream and then. The first section was popped up on foam tape to emphasize it and the other three were adhered flat against the background. A black die cut arrow was adhered so it pointed to the first part of the message and a clock button was glued next to it as a reference to her awareness that time is passing to get her dream into play and also because she is watching the clock until her shift is over. Once the barmaid was adhered in place, I decided that I wanted a visual triangle of red accents with her top being one of the points of the triangle. Three red brads were added inside the open arrow and two small rectangles of red cardstock were added to fill in the base of the bridge supports. That keeps the eye moving around the page and connects the image to the background. I like that repetition.

Thanks for joining Barmaid and me today. We appreciate that! To see what others on our talented The East Wind DT have created with this fabulous image, be sure to pop by The East Wind Facebook group where they will be posted throughout the day. She will be available in TEW shop later today. I'd love to see what you create with her and what other stories she has to tell.

Life is good; so is art.
Bonnie
Posted by Bonnie Irvine at 09:06

Hey Bonnie! I haven't said this lately - but I so enjoy and appreciate your description and insight into your artistic process. Example the three red accents in a visual triangle to create movement of the eye... and your back story for your focal image! LoVe reading your blog and watching your art change and grow! Your posts are on my must read list!
~ginny
RubberMAD