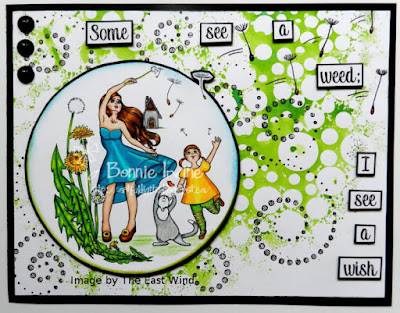 Hi everyone! Today marks the beginning of a new challenge on The East Wind blog. Our theme for Challenge #63 is I Like to Move It, Move It. We have a couple of ways that you can play along. You can either create a project where something actually moves, slides, wobbles, jiggles IRL OR you can use an image where there is movement within it (like the dandelions blowing in the wind) OR you can create movement in the background in an artsy fartsy way. I chose to do the second and third options on my art journal page. 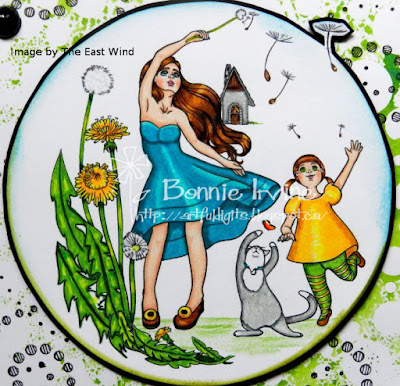 The image with movement in it is called Dandelion and it was one that immediately came to mind when I read this theme. The image was coloured with a mix of Prismacolor and Polychromos pencils. Once it was cut into a circular shape, the edges were inked with Broken China and Salty Ocean Distress inks. The image was then matted with black card stock and popped up on foam tape to create dimension and a natural shadow around it. 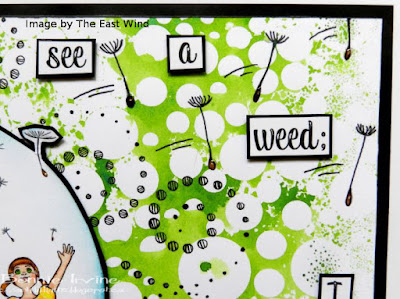 The background began life as a rectangle of white card stock onto which I flipped an ink sprayed stencil from Joggles called Bubble Blast to clean it off. The sprays used were Lindy's Starburst sprays in a variety of greens. I love using the negative stencilled image and hate wasting ink and wonderful colour so I often do this. It gives me a ready made background for a project like today's. To continue the flight of the dandlion seeds, I drew, coloured, and Glossy Accented more seeds onto the background. More movement and pattern was created by tracing through ColorBox SwirlDot stencil with a black pen and then filling in a pattern of lines in the open circles. Movement lines were addded beside the dandelion seeds with the same pen. 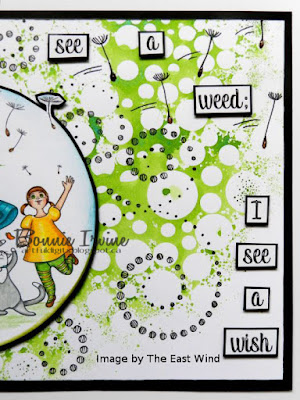 The sentiment was printed on white card stock and the words were cut apart. Black matting and foam tape were added to the backs of each word. Three large black domed pearls were added to the upper left corner to balance the design but that was it for embellies. I wanted a very light, airy background where the bubbles and swirls played up the theme of movement and the focus was on this beautiful image.

Thanks so much for stopping by today. That's so awesome of you! When you get a chance, pop over to The East Wind blog to see the other fabulous creations by my talented teamies on The East Wind DT. Their creativity always impresses me! We would love to have you play along with us and can't wait to see what you create!