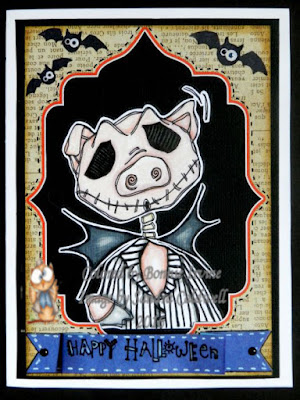 Hi everyone! Since we skipped last Monday's new releases because Sandra was sick, it means that today Sandra Caldwell has two fabulous groups of new releases available in her Etsy shop Babycakes Digis and Designs. The second image I played with is called 1072 Jack Swine. He was coloured with a mix of Prismacolor and Polychromos pencils, then fussy cut leaving a narrow white border. I think he's very dapper in his striped suit and bat wings. 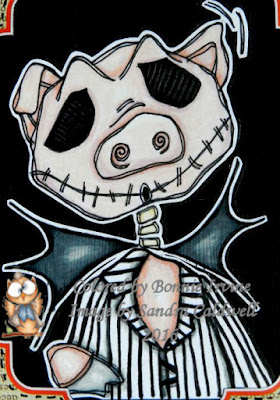 The background started as a rectangle of designer paper which had a different image inside the frame. I cut the inside out and matted it with black so that Jack contrasted with the spooky background. The frame was then faux stitched and tiny black bats were stamped and fussy cut. Before adding them to the frame above Jack's head, Glossy Accents were added to their eyes to add dimension and shine. 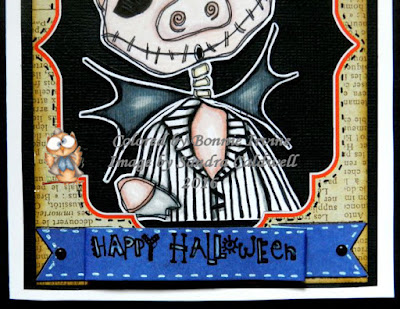 A purple banner was hand cut and then stamped with Versamark Ink. Black embossing powder was added to the ink and then heat set. The open letters were coloured in with white coloured pencil. White gel pen was used to faux stitch the banner. Black enamel dots were used to embellish the ends of the banner.

When you get a chance, pop by Sandra Caldwell Stamps Fans Facebook group to see the  two fabulous sets of new releases she has for us this week. it's going to be a banner day there with so many awesome images and DT projects being posted. To check out the rest of Sandra's awesome images, pop over to her Etsy shop, Babycakes Digis and Designs.  There is such a delightful collection of wonderful quirky images in Sandra's signature style that you are sure to be inspired!