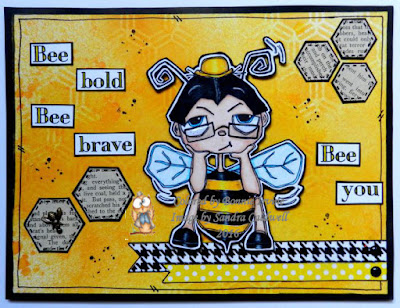 Hi there! There is a fun challenge going on over at the Sandra Caldwell Stamp Fans Facebook group. It's called Holley's Favourite Oldies. Holley has chosen three of Sandra's older images  and has asked us to create a project featuring one of these three: 565 Bernie Bee; 538 Sunday Best; 599 Bearly Raggedys...all great choices! 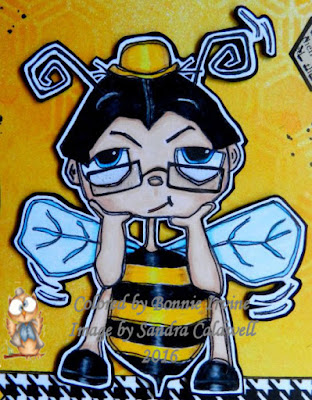 I decided to create with 565 Bernie Bee because I love love love bees and Sandra's bees always make me smile! Just look at that face! I coloured Bernie with a mix of Prismacolor and Polychromos pencils. His glasses were filled in with Glossy Accents to create both shine and dimension. Bernie was fussy cut leaving a narrow white border and then matted with black. Once he was trimmed out again, Bernie was popped up on foam tape to add dimension and create a natural shadow. 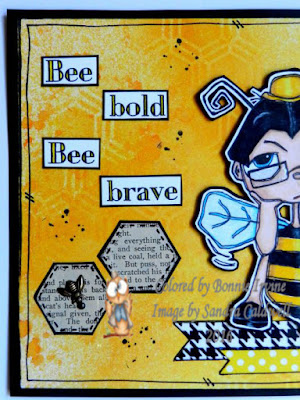 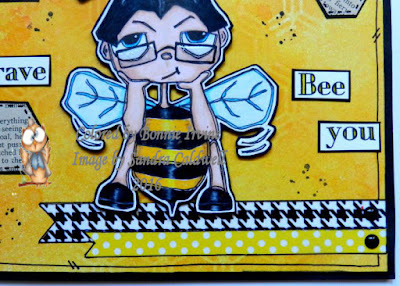 Two lengths of washi tape, adhered to white card stock to take away the transparency, were placed under Bernie so he would have a place to sit. Two enamel dots were adhered to the tapes. Two sizes of hexagon dies were used to cut shapes from old book text. They were matted with black and faux stitching was added with black pen. They were then added to opposite corners of the background. A tiny brass bee charm was added to one of the larger hexagons. 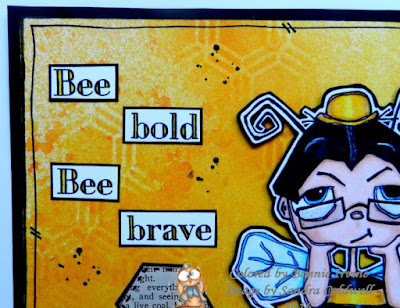 The sentiment was printed on white card stock and the letter openings were coloured with yellow marker. The words were then adhered flat to the background. A black border was doodled around the outside of the background and Black Big Brush Pen was used to edge the outside. Jet Black Archival Ink was used to stamp splatter dots here and there before a black matting was added to finish the page.

Thanks for joining Bernie and me today. You still have until September 16 to join in this fun challenge. We would love to see what you create with one of Holley's Favourite Oldies from Sandra Caldwell's Etsy shop, Babycakes Digis and Designs. Hope to see you there!

Life is good; so is art.
Bonnie
Posted by Bonnie Irvine at 13:12