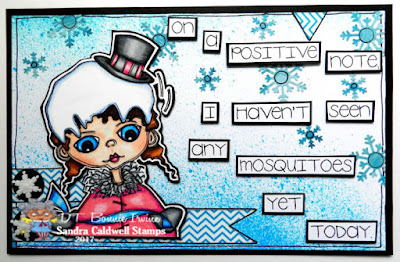 Hi everyone! I'm here with my second project of the day with another new release from Sandra Caldwell's Etsy shop, Babycakes Digis and Designs. We took a couple of weeks off so we will have double release days this Friday and next to catch up on all the new and fabulous images. For this one, I decided to beat the heat of August by playing with a winter themed image called 1691 Snow Cutie, She has the sweetest face and a positive attitude to match even with the major brain freeze from the snow on her head. 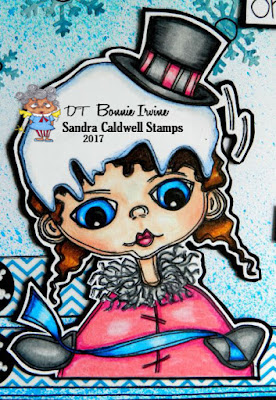 I coloured Snow Cutie with a mix of Prismacolor and Polychromos pencils.  She was then fussy cut leaving a narrow white border  and then matted with black cardstock. After fussy cutting her again leaving a narrow black border, foam tape was applied to the back  to add dimension and create natural shadow. 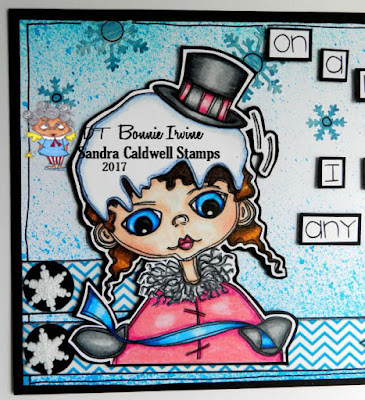 The background began as a piece of white cardstock which I had used as a mask on another project. It caught all of this wonderful blue sprayed ink along the top and bottom of the sheet, leaving the middle considerably lighter. I cut it into a 5.5 x 8 inch rectangle to serve as the start of a wintry background for Cutie. I pulled out two different size snowflake punches and went to town creating snowflakes from blue marbled paper. These were adhered toward the top of the background. Two strips of blue and white washi tape were adhered to white cardstock so they were no longer translucent and then cut into flags to ground Cutie. The one triangle which was cut away was also adhered to the top of the page to create flow. 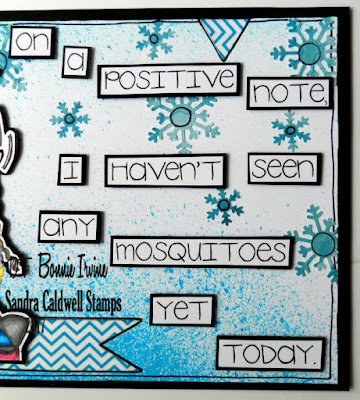 The sentiment was printed on white cardstock, cut apart, and matted with black. Foam tape was added to the back of each word. They were then adhered to the background. At this point, I felt that the snowflakes didn't stand out against the background enough so black pen was used to draw circles in the middle of each. The same pen was used to doodle the border and outline the washi tape before Cutie was adhered in place. To continue the circle and snowflake details, a black .5 inch circle was punched from cardstock and added to each of the washi bands. Sparkly snowflake buttons with their shanks removed were adherde to those circles. Black Big Brush Pen was used to edge the card before it was matted with black cardstock.

Thanks for joining Snow Cutie and me today. To see the rest of this awesome release and the wonderful DT projects featuring them, be sure to pop by the Sandra Caldwell Stamp Fans Facebook group where they will be posted along with the first set of new releases. You will find all of them along with a plethora of other inspirational images in Sandra's Etsy shop later today.