Hi everyone! This is a quick little post to share some sweet little tags I created for use in my junk journal...either the kraft one I'm presently working on or a future one because I know that I am now totally hooked and won't stop at one :) The tags are three sizes ( 7/8 wide x 1.5 inches long; 1 3/8 x 2 5/8; 1 3/4 x 2 5/8) and began life as white tags with white strings. They had previously been coffee dyed, mostly as an experiment to see how they held up to the process. All of the tags were baked to dry and then ironed to get them as flat as possible. 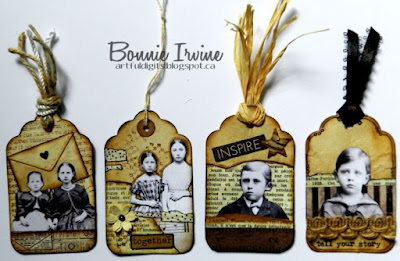 I had purchased some sweet children images which came in 3 sizes from an Etsy shop which seems to have disappeared. The images came with a digital mixed media background. I printed the 1.5 inch size and fussy cut the kids because the background didn't fit the colour scheme I wanted and I also like the look of fussy cut images. All of the images were edged with a black Pitt brush marker.

Using torn scraps of French text and music paper, as well as scraps of packaging, ephemera, and washi tape, tiny collages were constructed on the two larger sets of tags. Some background stamping  was done first before anything was adhered to the tags themselves and the edges of the papers were inked with Coffee Archival ink or in some cases black Big Brush pen. Words were added either with Idea-ology rub-ons or Chit Chat Stickers. which were then outlines in black. 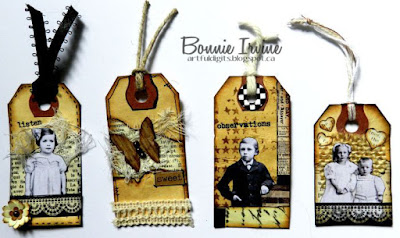 Embellishments were added to finish each tag. In some cases, it was cheesecloth, burlap, or a die cut envelope placed behind the children's heads. In others, lace or burlap trim, punched hearts, stars, and flowers were added. In all cases, string, ribbon, or raffia were used as the tag toppers. The outside edges were inked with both Coffee and Jet Black Archival ink and three were given doodled borders just to change them up...and because I am a mixed media type :) Simple Coffee Archival Ink stamping and the same edging took away the plainness of the backs.

The four smallest tags were not given any images although I did have some that would fit. Instead, the paper was adhered (I used gel medium) and embellies were added. Things such as a coffee dyed mulberry flower with a button center, hearts punched from book paper or corrugated coffee sleeves, a punched card stock star, or a bit of cheesecloth with an Idea-ology brad were used to become the focals. Faux stitching or doodling was done as a border on three and the original coffee dyed strings were used as toppers...although that can easily be changes. The same inking was done to the edges of these tags as was done with the larger ones.

Thanks for popping by today. You know I love that!

Life is good; so is art.
Bonnie
Posted by Bonnie Irvine at 12:15

These are perfect, Bonnie!

I am so enjoying your vintage style junk Jl. It's more my style, though I also do and enjoy the quirky styles, it's a great inspiring change of pace. Thanks for sharing.
Trish G