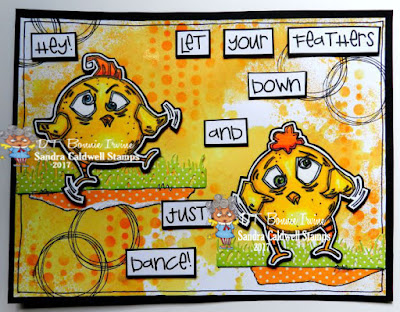 Hi everyone! With Sandra's return from holidays, we have two sets of new releases today in her Etsy shop, Babycakes Digis and Designs. The DT had a couple of weeks off but will do double release days for the next two Fridays. The first image I chose to play with is called 1703 Crazy Birdies. I am a huge fan of Sandra's chicks...there is an entire collection of them in the shop so these babies called to me immediately. 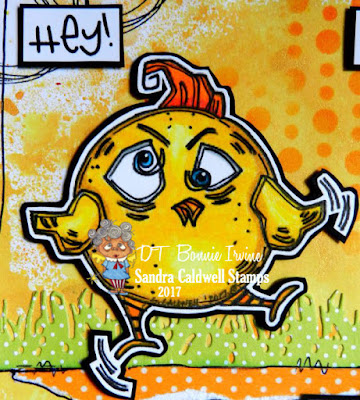 I coloured them with a mix of Prismacolor and Polychromos pencils. Although they both come on the same image, I fussy cut them leaving a narrow white border so that I could change the arrangement to suit the size of my art journal background. They were then each matted with black cardstock, and fussy cut again leaving a narrow black border. Foam tape was applied to the back of each. 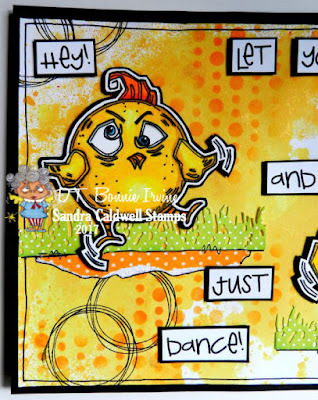 The background began as a sheet of mop up white cardstock which was used to pick up the over spray from three Lindy's Starburst colours: Yellow Rose of Texas, Marigold Yellow orange, and California Poppy Gold. I cut a 6 x 8 inch piece from this sheet  and then stencilled circles on it using Tiger Lily Archival Ink and TCW Mini Beaded Curtain stencil. To give both birdies a place to dance, grass was die cut (Joy Crafts die) from green and white dotty paper which was edged with Viridian Archival Ink along the bottom. Orange dotty washi tape was applied to white cardstock and then torn and added beneath the grass. Black Bokeh Dots were added with Jet Black Archival Ink and an Ellen Hutson stamp. 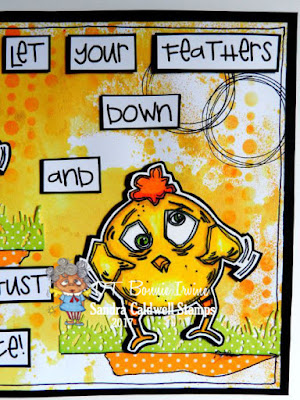 The sentiment, printed on white cardstock, was cut into individual words and matted with black. Foam tape was added to the back of each. A simple border was doodled around the outside edges of the background and black Big Brush Pen was used to darken the same edges. A black cardstock mat was adhered to the back of the page to serve as a frame and add contrast.

Thanks for joining my Crazy Birdies and me today. To see the other wonderful images from this set of new releases, as well as the fabulous DT projects which feature them, be sure to pop by Sandra Caldwell Stamp Fans Facebook group where they will be posted throughout the day. And stay tuned for the next post today where I will be showing you my project with the image I chose from the second of today's new release sets. Inspiration galore today in Sandra's Etsy shop!

Life is good: so is art.
Bonnie
Posted by Bonnie Irvine at 07:00