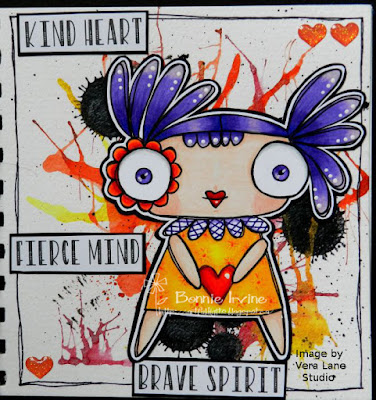 Hi everyone! I love this Vera Lane Studio image named after the wonderful Stephanie on the VLS design team. She's so cute, has fabulous hair, and has inspired me to create a page just for her. It had to be bright, bold, and brave to match her spirit and feature hearts because Stephanie has a big heart. 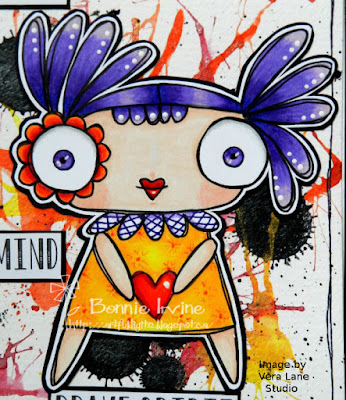 I coloured Stephanie with Prismacolor and Polychromos pencils using white acrylic paint and a stylus to dot her hair. The dress pattern was created with a fine tip red pen and the purple collar pattern with a purple Staedler Fineliner. She was fussy cut leaving a narrow white border, matted with black, and fussy cut again leaving a narrow black border. 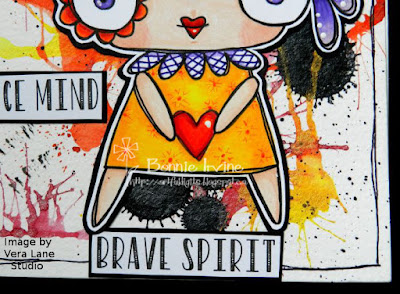 The background was super simple. Lindy's Hag's Wart Orange, Pretty in Pink Pink, and Yellow Rose of Texas Starburst sprays were dribbled into small puddles on the watercolor paper background. Using a combination of a straw for the larger drips and a TH spritzer tool for the tiny drips, the ink was moved around the page to get the background I wanted. FW black Pearlescent Ink was used to add Darkroom Door Paint Splats stamps to the background in 3 places. It was also used to make splatter dots and add some marks with a rake brush. 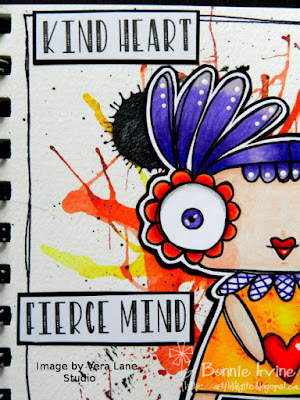 The message was printed onto white cardstock, cut into sections, and matted with black. A black border was doodled around the outside edge and orange epoxy hearts were added to opposite corners.

Life is good; so is art.
Bonnie
Posted by Bonnie Irvine at 15:35