Take that ~ inspired by the Vera Lane Studio swap 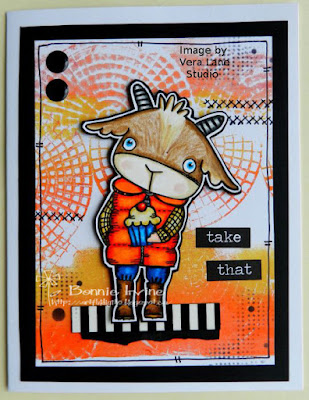 Hi everyone! In an earlier post, I shared the two ATCs I made for the Off With Their Heads Swap at Vera Lane Studio Facebook group. I always like to create a card to go with the theme so I can write a little note for my partner. The idea with this theme is to take the head from one image and combine it with a body from another image. I love this...it's so fun and never fails to make me laugh. This time I chose to pair the head of a goat from Vera Lane Studio Farm Animals Set 2 with the body from one of The Foxes. The fox was holding an acorn but I wanted the merged guy to hold a cupcake so I took one from Caroline's Cupcakes. 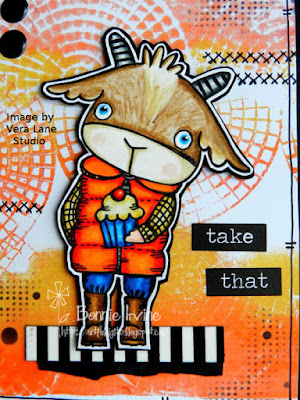 I coloured the three parts for the merged image with Prismacolor and Polychromos pencils, cut the head and the body, leaving a narrow white border, and glued them together. Before matting him with black cardstock and trimming him out again, I used an Exacto blade to slice around his hand so that I could tuck the cupcake behind it in a more natural way. Foam tape was adhered to the back of him to pop him up when attached to the background. 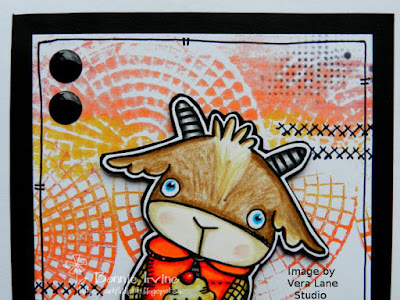 The background was a gel printed rectangle covered with acrylic paint and the design from a piece of plastic mesh. Stencilling was added with Jet Black Archival Ink and AALL & Create Lotza Dotz template. Stamping was added with the same ink and a Viva Las Vegas stitching stamp. 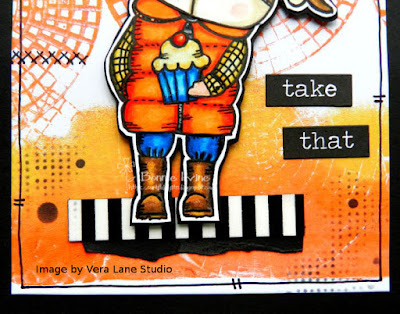 To ground my friend, striped washi tape adhered to a strip of  white cardstock layered over a torn strip of black was added to the bottom of the background. A black pen was used to doodle a border around the card front and two epoxy dots were added to the top left corner. The wording is two Big Chat Stickers with black backgrounds. The entire front was matted with black cardstock before it was adhered to the white card base.

Thanks for visiting today. My little friend and I appreciate that. It's not too late to play along in this fun ATC swap so hop on over to the VLS Facebook group to check out the details and gain some inspiration from the ATCs already completed and placed in the album. They are awesome!