Don't Have Time? ~ Inspired by a Vera Lane Studio Image 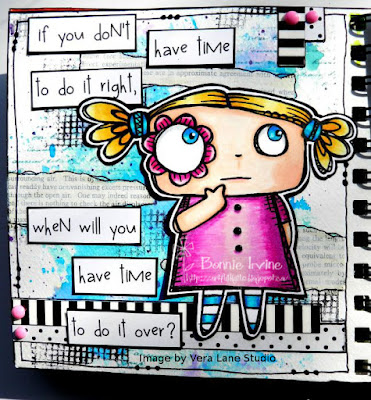 Hi everyone! I love this image from Vera Lane Studio called Bright Ideas. There are two sweet girls, this one with the confuzzled look and another having a eureka moment, a cute saying, a light bulb and a thought bubble...lots to create different stories. I found this awesome saying which made so much sense to me and it seemed to suit the one image and would serve as a good reminder to me when I feel like rushing. 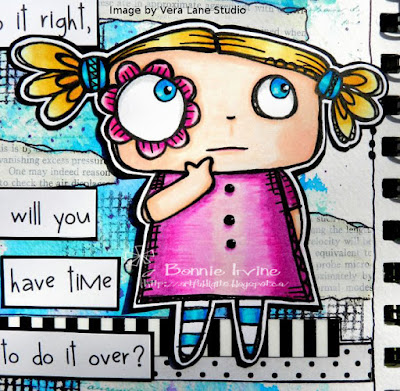 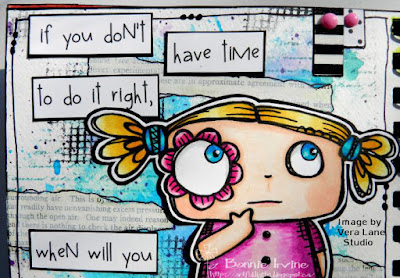 The 6x6 inch watercolour paper background was coloured with a 3x3" gel plate which had been smushed with Peacock Feathers, Mermaid Lagoon, and Wilted Violet Distress Oxides one at a time. Each time the ink was spritzed while on the gel plate and then set down and picked up, repeatedly until I had the pattern and amount of coverage I wanted. Each colour was dried before the new one was added. When all 3 had been applied and dried, Lindy's Witch's Potion Purple Starburst Spray was splattered over the background using a fan brush. A grid stamp from Visible Image Mesh-ellaneous set was added with Jet Black Archival Ink. Torn book text was adhered in three places and then scrubbed with a scruffy brush and white gesso to push the words into the background. 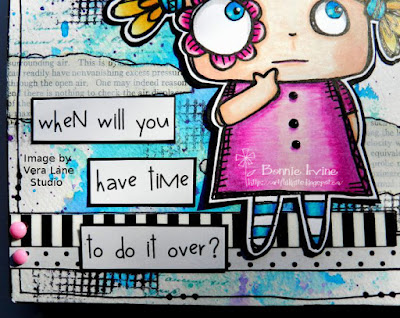 To give my little friend a place to stand, a length of striped washi tape adhered to a strip of white cardstock plus another strip of dotty paper were adhered to the lower part of the page. The leftover bits were added to the top right of the page and two sizes of pink enamel dots were layered on the outside edges to tie in with her dress and the pinky purple from the Wilted Violet ink. The wording was printed onto white cardstock, cut into sections, and matted with black before they were adhered to the page. A doodled border and inking of the page edges with black Big Brush Pen were the final touches.

Thanks for dropping by today. We appreciate that! When you get a chance, pop by the Vera Lane Studio shop to check out the fabulous images. Janet has both uncoloured and pre-coloured images and wonderful collage sheets to suit every whim.