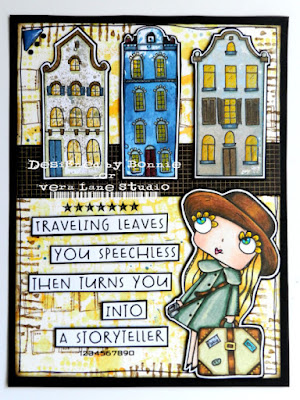 Hi everyone! I am not much of a traveller except virtually. I did thoroughly enjoy Janet's photos when she went to Holland recently so when she released the Amsterdam image in the Vera Lane Studio shop with these gorgeous buildings, I knew just who I wanted to have visit them. I chose to feature the image called The Traveller. She is one of my favourite VLS images. I love the look of awe on her face and imagine her as just having arrived, making her way to her hotel, and having to stop and admire the sights. 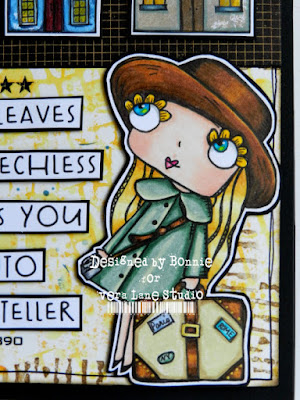 I coloured the Traveller with Prismacolor and Polychromos pencils, using the same pencils to shade the buildings which had been printed on ink-sprayed mop up paper to give them additional age and texture. 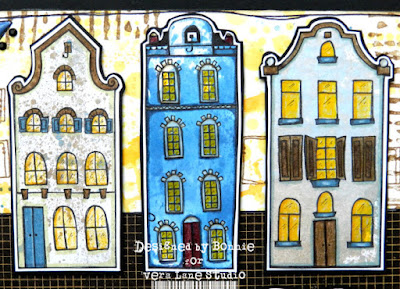 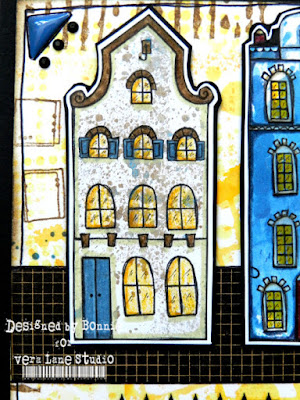 The 6x8 inch background was originally used to soak up Lindy's Starburst sprays which had been spritzed over Stamperia Wall Effect stencil. The holes were sprayed through on another background and then flipped over onto this particular mixed media page. Stamping was added using Sunflower Archival Ink and one of the Indigo Blu Tasty Textures stamps. The same ink was sponged through Carabelle Studio Toujours des Ronds stencil. Border stamping was done with Coffee Archival and another stamp from the Indigo Blu set. Stampotique Dotted Squares was applied with the same Coffee Archival Ink. To bring a little of the blue from the buildings into the background, splatter dots were added with a Rubber Moon stamp and Cornflower Archival Ink. A length of wide washi tape was added to the background to ground the buildings. 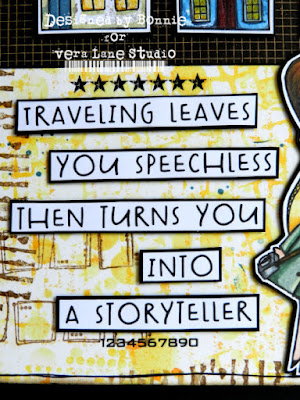 One of the two sentiments from the Amsterdam digi set was printed onto white cardstock, cut into sections, and matted with black. Foam tape was used to pop the sections up. Two rub-ons from Idea-ology were used to frame the wording top and bottom. A border was doodled around the outside edge which was also inked with Coffee Archival and black Big Brush Pen. To balance the design and add another little pop of blue to the page, a puffy triangle sticker and three black gems were adhered to the top left corner before the background was matted with black cardstock, framing it out.

Thanks so much for joining the Traveller and me today on our virtual trip to Amsterdam. I hope you enjoyed it as much as we did :) Be sure to pop by the Vera Lane Studio shop and Facebook group to get more inspiration and find some must-haves. Both are wonderful places to visit.