Dancing to my drummer ~ inspired by a Vera Lane Studio image 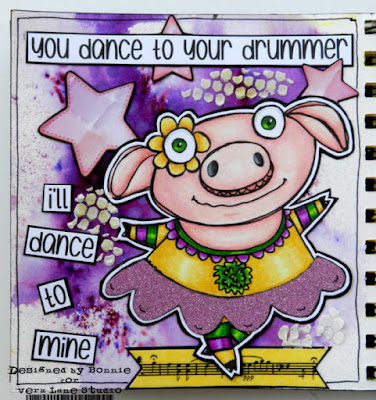 Hi everyone! This is the first of two posts today for Vera Lane Studio DT projects. I found this saying on Pinterest and went in search of the image that would help me illustrate it in my art journal. That image happens to be this awesome dancing pig from the Bacon Bits set. There are six hilarious pigs and two expressions in this set and I knew that this lovely ballerina was perfect for what I wanted. 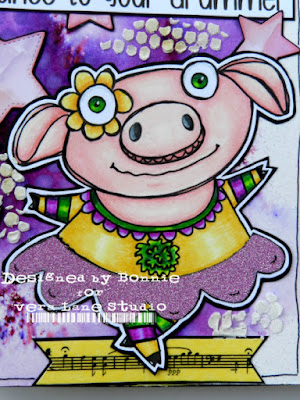 I coloured Dancing Pig with a mix of Polchromos and Prismacolor pencils except for her sparkling skirt. That I fussy cut using the skirt image as a template from a scrap of glittery cardstock left from some packaging. Everyone deserves a little sparkle! She was fussy cut leaving a narrow white border, matted with black, and fussy cut again leaving a narrow black border to help her stand out against the background. 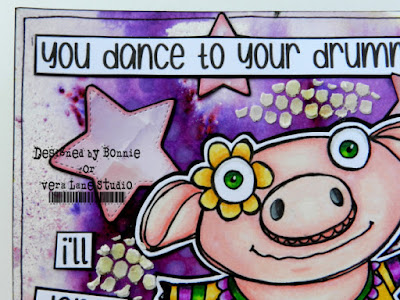 The 6x6 inch watercolour background was spritzed with water and sprinkled with Purple Brusho Crystals. More water was applied in some areas and the page was tipped in different directions to achieve the coverage and leave the white space I wanted. Extra crystals were dropped in a few places to get those tiny bursts of the various colours within the purple mix...love that! To ground Dancing Pig, a length of yellow music washi tape was added below her feet. The yellow colour pulls her top and flower colour into the background. Three pink stars were die cut using a Little B stars set and designer paper. These were edged in Worn Lipstick Distress Oxide and then matted in black to keep them from disappearing into the background before being adhered above/behind her. 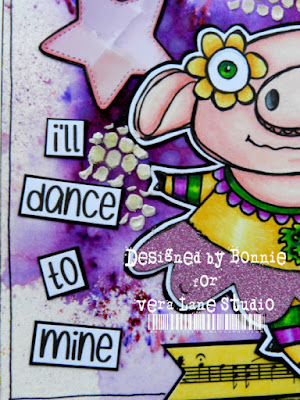 The wording was printed onto white cardstock, cut into sections to fit on the page, and matted with black. Before they were adhered, Texture Paste was scraped through a TCW Netting stencil in three areas to break up the purple. Some of the colour was picked up from the background but I was OK with that look. To complete the page, a simple border was doodled around the sides and black Big Brush Pen was used to darken the page edges which helps to frame her.

Thanks for joining Dancing Pig and me today. We're glad you did. When you get a chance, be sure to check out the other awesome images in the Vera Lane Studio shop. New images are added all the time and featured on the Vera Lane Studio Facebook group. Stay tuned for my second project! It makes me smile, too.

Life is good; so is art.
Bonnie
Posted by Bonnie Irvine at 07:35