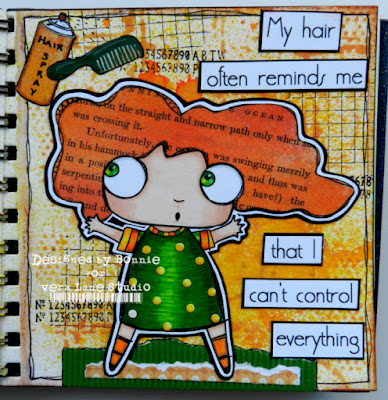 Hi everyone! Yesterday, Vera Lane Studio released an adorable set of two images and two sayings and I am smitten with them... so much so that I couldn't choose between them so I created a journal page for each. 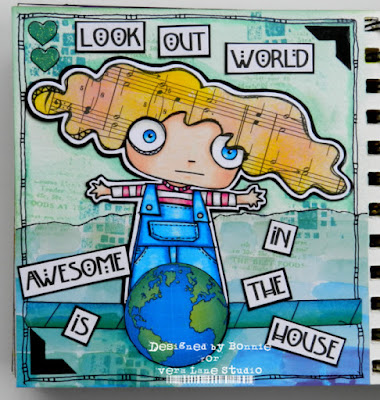 The set is called Contessa and they have the most fabulous expressions and hair...and stripes. Did I mention that they had those? They make me smile. 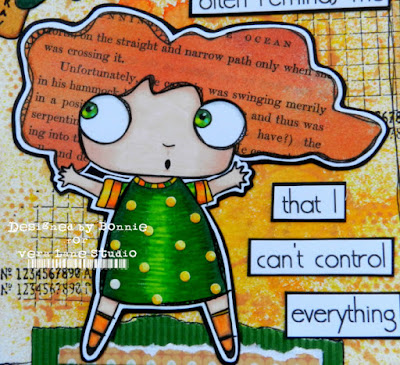 I coloured both images with Prismacolor and Polychromos pencils except for their hair. Contessa in the dress had her hair paper pieced from ink sprayed book paper and she had yellow punched dots adhered to her dress because she loves stripes and dots together. 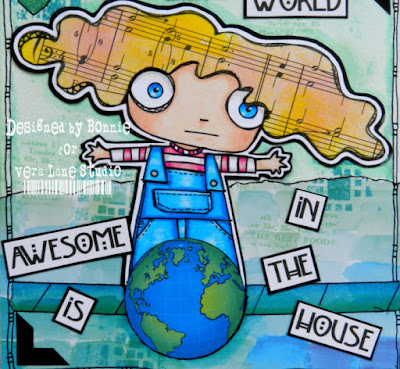 Contessa in the overalls had her hair paper pieced from Lindy's Starburst sprayed and Distress Oxide inked music paper. They were both fussy cut leaving a white border, matted with black cardstock, and fussy cut again leaving a narrow black border. 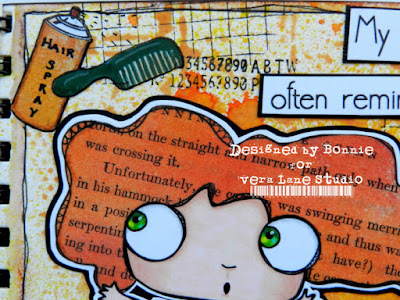 The background of Dress Contessa's page was spritzed with Lindy's Yellow Rose of Texas, California Yellow Gold, and Marigold Yellow Orange Starburst Sprays. Grid and number stamping were added with Jet Black Archival and dotty stencilling with Rusty Hinge Distress Oxide Ink. Images of a can of hair spray and a comb were fussy cut, altered in colour and labelling, and adhered to the top left corner of the page. 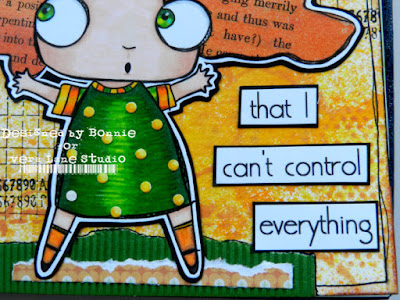 Contessa was grounded with a torn piece of green corrugated paper topped with a scrap of floral paper. The sentiment was printed onto white cardstock, trimmed into sections and matted with black. The outside edges of the page were darkened with Rusty Hinge Distress Oxide and black Big Brush Pen before a border was doodled to finish the page. 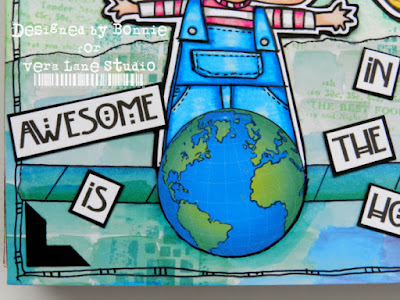 Overall Contessa's page was inked with Cracked Pistachio and Broken China Distress Inks and a torn piece of patterned paper was adhered to the lower half. Text and squares were stamped on both halves with the same Distress Oxide Inks used above. Contessa was anchored with a strip of washi tape, lined with black pen to look like a sidewalk. A world image was fussy cut and placed in front of her to tie in with the saying. 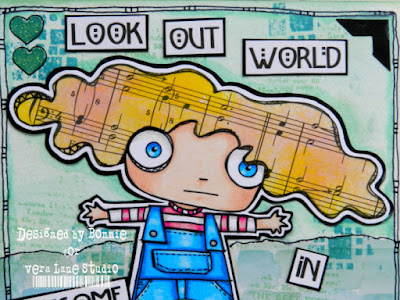 The page was finished with two epoxy hearts in the top left corner and two photo corners placed opposite each other. A border was doodled with black ink and the page edges were inked with Cracked Pistachio Distress Ink and black Big Brush Pen. The saying was done in the same way as the first page.

Thanks for joining the two Contessa's and me today. We are delighted that you did. When you get a minute, be sure to stop by the Vera Lane Studio Facebook group each day to see what my other talented VLS DT buddies created with these sweeties. You'll be glad you did! Check out the Vera Lane Studio shop while you are at it. There are so many "must haves" there just waiting for you :)