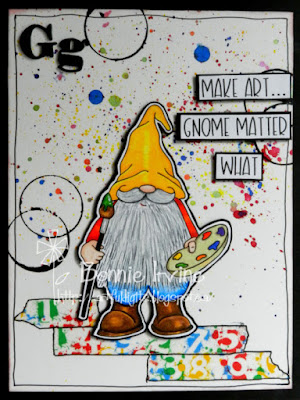 Hi everyone! it's Week 49 of the Joggles Art Journal Adventure which means we have three more to go after today's post. The time...she flies :) The prompt for Week 49 is the Letter G. I have been seeing gnomes absolutely everywhere lately so I had to try my hand at colouring and creating with one. I found an artist gnome digital stamp at KLM Digital Designs on Etsy and felt that Painter Gnome was perfect for this prompt. 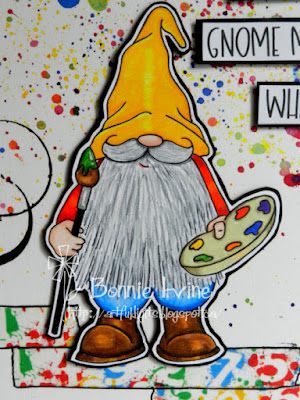 I coloured Painter Gnome with a mix of Prismacolor and Polychromos pencils. I used both a paint pen and watered down white chalk paint to create the top layer of his beard and bring back the brightness because with all of the layers of gray, it was looking a little smoky. PG was then fussy cut leaving a narrow white border, matted with black cardstock, and fussy cut a second time leaving a black border. Foam tape was used to adhere him to the background and add dimension/shadow. 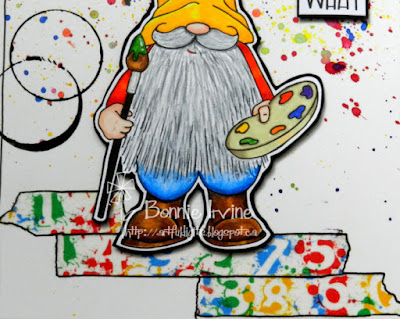 The 6x8 inch mixed media paper background was splattered with Brusho crystals and water mixed as well as a few colours of Lindy's Starburst Sprays flicked with a paint brush straight from the bottle. The splatters were mainly placed in the top 2/3 of the page. Black gesso was slightly watered down and added with a bottle lid to make rings in three places. To ground PG, three lengths of splatty washi tape were stacked across the bottom of the page. The colours were similar to the ones used to make the splatters. There are numbers within the washi. Do you think PG likes to paint by number sometimes? LOL 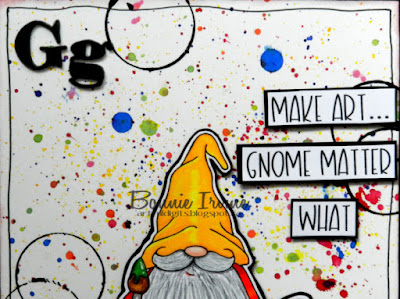 Thanks for joining PG and me today. I can't wait to see what others in the Art Journal Adventure group choose for the letter G. They are a creative bunch so I'll just have to wait and see.