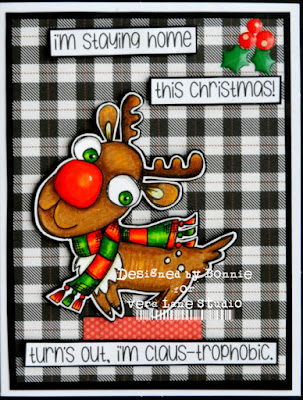 Hi everyone! I have a quick post sharing a fun Christmas card I made with one of the images from the Rudolf digi set by Vera Lane Studio. They are the cutest reindeer with 3 different poses and the loveliest big noses. 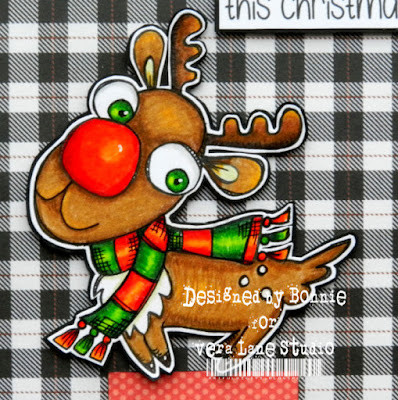 I coloured Rudolf with a mix of Prismacolor, Polychromos, and Caran D'ache pencils. He was then fussy cut, leaving a narrow white border. Once matted to black cardstock, Rudy was fussy cut a second time leaving a narrow black border. This helps him stand out against the plaid background. Rudy was popped up on foam tape to give him dimension. 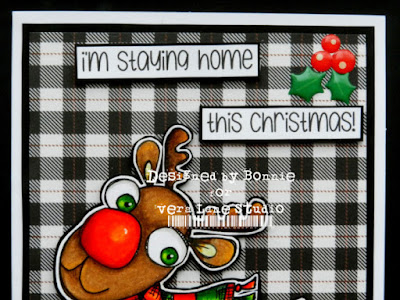 The plaid paper was matted with black cardstock which was cut slightly smaller than the black so it framed the plaid. This was adhered to the white card base which added a white border to the black. Three enamel berries and two holly leaves were glued to the upper right corner. 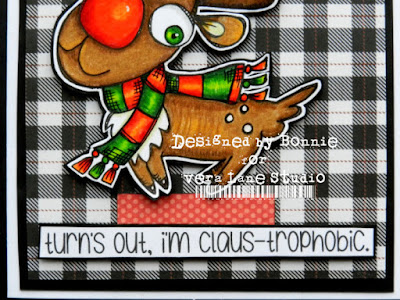 The saying was printed onto white cardstock, cut into sections, and matted with black. The wording was then popped up on foam tape to create a natural shadow. To ground Rudolf, although he wants to remind you that he can fly, a piece of washi tape was adhered to white cardstock and glued between the wording and Rudy.

Thanks for popping by to visit with Rudy and me. I hope you get a chance to stop by the Vera Lane Studio Etsy shop and our VLS Facebook group. There's lots to see both places :)

Life is good; so is art.
Bonnie
Posted by Bonnie Irvine at 08:20