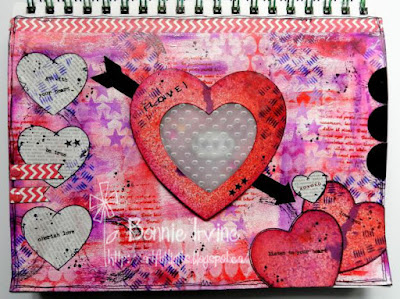 Hi everyone! As many of you know, I have been playing along with Barb Donahay over at the Joggles blog. She is doing a weekly Art Journal Adventure mixed media spread as a prompt for anyone who wants to play along. She also has started a FB group for participants which will provide even more inspiration as people post their creations. I just completed the spread for week 6 although Barb posted week 7's AJA today. No worries and no pressure! 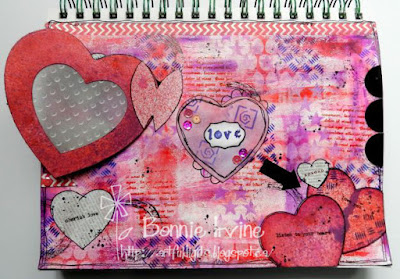 I started the background with the same steps, colours, and products as Barb. I scraped the gesso onto the page with a palette knife and then finger painted Dina Wakley Media paint in Magenta, Ruby Red, and Blackberry Violet. Like Barb, I broke up some of the colour with white although I brayered Dylusions White Linen on. Then I kind of went off my own way for a bit. I used a brush mix of the Blackberry Violet and White Linen and pounced it through Joggles Punchinella Trio stencil using a stencil brush. I also used another shape from the same stencil and Ruby Red to add a little more pattern. Vermillion Archival ink was used to apply Joggles' Nonsense Latin Text stamp. Jet Black Archival was used to stamp the tiny black lines and Hero Arts' painted Circle stamp. 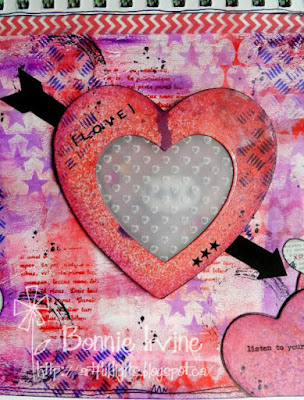 I loved the idea of a heart tip-in but didn't have any of that gorgeous fantasy film to tuck behind the aperture. Instead, parchment paper was run through my Cuttlebug with a heart embossing folder and sandwiched between the hearts. They had already been spritzed with Lindy's Stamp Gang Starburst sprays in Hottie Patottie Hot Pink, Bougainvillea Fuchsia, Rudolph's Nose Red and Witch's Potion Purple. Some stamping and some rub-ons were added to the front to tie it into the background. 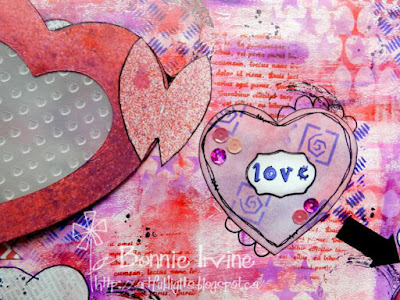 I created a hinge from some of the scraps and adhered one side to the back of the heart and the other side to the background so that the heart would open and reveal another heart behind. The smaller heart was inked with Worn Lipstick and Dusty Concord Distress inks and stencilled/doodled on. A small label was die cut from white cardstock and the word love was stamped on it. 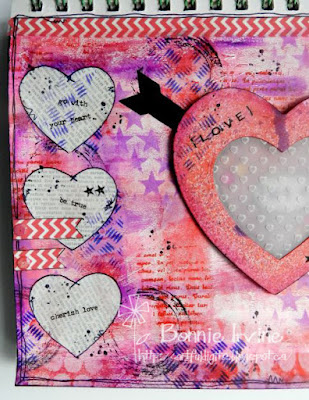 Two sizes of heart dies were used to cut the French text hearts. They were given a wash of gesso and then some rub-ons and stamping before being outlined with black pen. Washi tape was applied to the top edge of the page and as two strips on the left side of the page. Tiny sequins embellished them to tie in with the ones on the hidden heart. The black arrow was traced and fussy cut from TH's Arrows Layering stencil, split in half, and adhered on two sides of the heart tip-in. 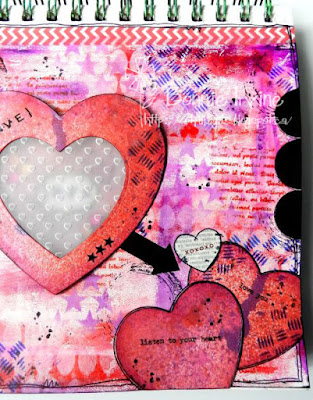 Three black cardstock semi circles were punched and adhered to the right side of the page for balance and contrast. The two larger sprayed hearts are the cut-outs from the tip-in. Again, they were stamped and outlined and then rub-ons were applied. To complete the page, black Big Brush pen was used to edge the outsides and a border was doodled with a black Pitt pen.

Thanks for popping by today. I'm so glad you did. I would love to see what you have created if you are following along with Barb's Art Journal Adventure. Why not join our FB group and share your creations? We'd love to see you there.

Life is good; so is art.
Bonnie
Posted by Bonnie Irvine at 05:22