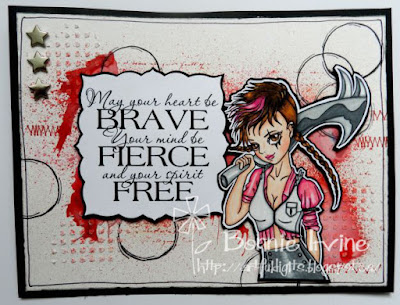 Hi everyone. Tuesdays and Fridays are New Release days at The East Wind, days we all look forward to, DT and fans alike, The image which will be released today is called Aurora Warrior and she is fierce, strong, and confident.. 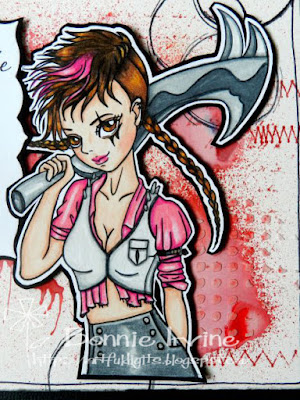 I coloured Aurora with a mix of Prismacolor and Polychromos pencils. She was then fussy cut leaving a narrow white border and then matted with black cardstock. Once I trimmed her out again, foam tape was applied to the back to pop her up and give her dimension. 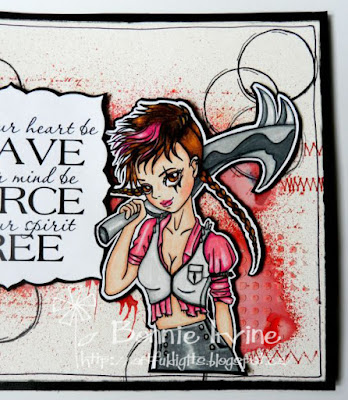 The 6 x 8 inch mixed media background was sprinkled with OST Red and Rose Red Brusho Crystals. However, instead of spritzing with water to activate the colour, I used Dylusions White Linen Ink Spray. It creates a more muted and marbled look...very cool. Tone on tone pattern was added with Vermillion Archival ink and a zigzag stitch stamp as well as a text one. Contrasting rings were stamped with Jet Black Archival and Stampotique's Circles Cube. White embossing paste was scraped through Dina Wakley's Plastic Canvas stencil. I love that it picked up some of the colour from the Brusho crystals, more in some places than others. 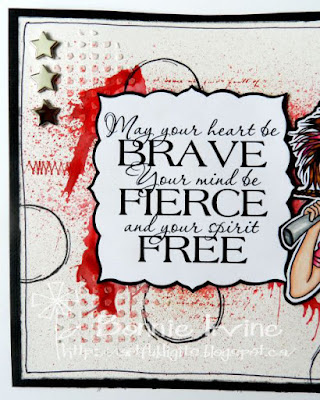 The sentiment is from Create With TLC and is from the set called Be Brave. It was exactly what I was looking for to pair with this image. I printed it on white cardstock, cut it with Spellbinders Labels 26 die, and matted it with black cardstock. Foam tape was used to pop it up and tucked under and over the image pieces to tie it all together. A simple border was added with a black pen and three silver star brads were added to the top left corner. To finish the page, black Big Brush Pen was used to edge the page before it was matted with black cardstock to frame it.

Thanks for stopping by today. Aurora and I appreciate that. To see other creations showcasing this new release and made by my talented teamies, be sure to stop by The East Wind Facebook group where they will be posted throughout the day. We would love to see what you do with her, too.

Bonnie
I love what you did here and from this spot I wondered around your blog and I love your art journaling!! All the mixed media stuff is new to me and I really like the whole concept. So many techniques and so little time!!! LOL Love your artwork!! Hugs