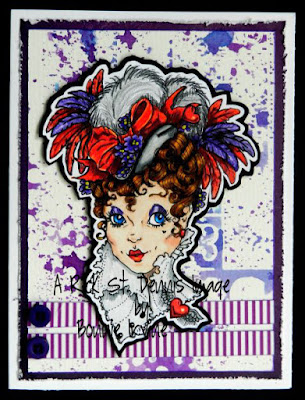 Hi there. Today is my day to feature a project on Rick St. Dennis' Fans & Friends Facebook group. I also found myself short of pretty cards the other day so I decided to accomplish two things at once. I would make a pretty card, suitable for many purposes, featuring an RSD image. 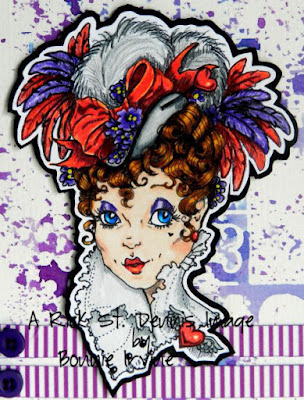 I chose to colour Valentine Hat, one of Rick's gorgeous hat lady images. She was coloured with a mix of Prismacolor and Polychromos pencils. Once finished, Val was fussy cut leaving a narrow white border and then matted with black cardstock. She was popped up on foam tape to add dimension and shadow behind her. 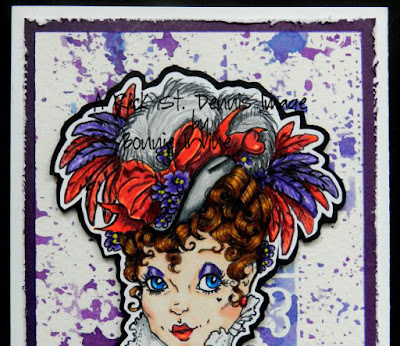 The background was a section of a mop-up page where I flipped over TCW's Bingo stencil and mini Punchinella stencil after spritzing over them with Lindy's Starburst spray to create another background. This prints the negative or reverse pattern and is much less crisp, more watery. Love that effect! This mixed media paper was cut to size choosing the section I wanted. It was then matted with purple cardstock with distressed edges. 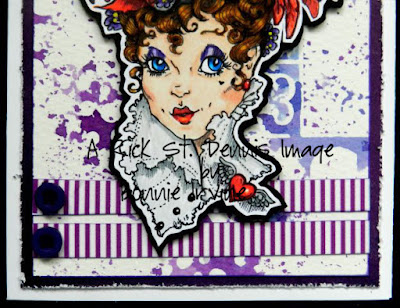 Purple striped washi tape was adhered to white cardstock and trimmed close to the edges. It was then edged with a Big Brush pen and cut into two strips which were adhered near the bottom of the background. Two buttons were threaded with embroidery floss and adhered on the washi with Glossy Accents. Once the matted background was adhered onto the white card base, the card was done. I purposely left any sentiment off because it's an easy thing to add once I know what occasion it will be used for.

Thanks so much for popping by today. You still have a few days to enter a project into the Hearts and/or Arrows Challenge on the RSD Facebook page. This card with the two hearts on the image would certainly fit the theme.