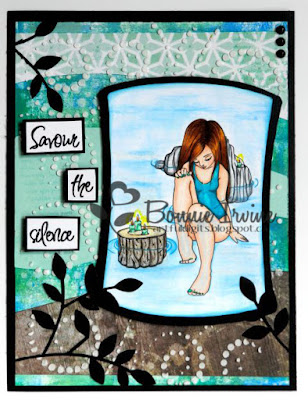 Hi everyone. It's Friday and that means a brand new image will be released today at The East Wind Etsy shop. The image is called Aurora Sloquet and it's a beauty. She is so serene and seems to me to be in a place of healing and peace. It's a very different image from the ones I usually colour but it spoke to me...in quiet whispers. 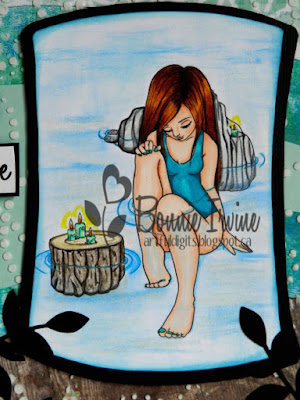 I coloured Aurora, the rocks, and tree stump with Prismacolor and Polychromos pencils. The background water was coloured with three shades of blue Pan Pastel which I set with fixative once I was satisfied. I wanted a soft barely there effect with some gentle movement. The image was die cut with Spellbinders Reverse Wonky Rectangles die and then matted with black cardstock. Foam tape was used to adhere the image to the background once it was completed. 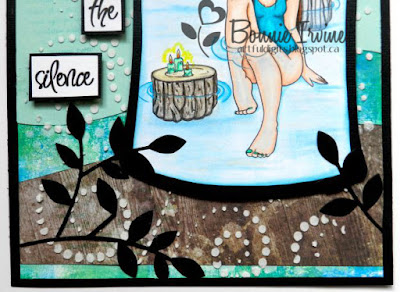 The background began as a 6 x 8 inch rectangle of mixed media paper onto which I had brayered several blue and green Fresco Finish chalk paints. It was quite a heavy background so I decided to break it up withthree separate waves cut from designer paper. One paper is distressed brown with woodgrain patter, one plain greeny-blue, and one a lighter greeny-blue with a white pattern on it. These were adhered to the painted background leaving space around each of them for the original background to show through. It made it far less overwhelming as only strips of the dark peeked through. To tie the painted background and the wavy strips together, white embossing paste was scraped through Colorbox's Swirl Dot stencil. This also added movement to the piece tying it in with the water in the image. 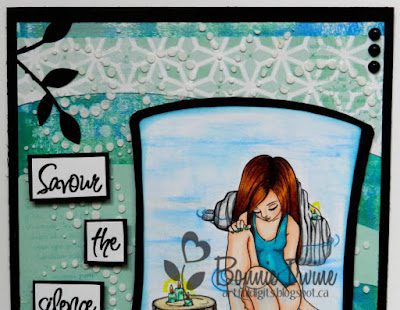 The sentiment was printed onto white cardstock, matted with black, and popped up on foam tape. Memory Box's Lorelai Leaf die was used to cut the leafy branches from black cardstock to accent three corners. The fourth corner had black half pearls adhered in a group of three to finish it. Black Big Brush Pen was used to edge the background before it was adhered to a black mat.This frames and finishes the page.

Thanks for popping by today. Aurora is being quiet right now but I'm sure she would want me to say how much we appreciate your visit. To see what some of my talented teamies did with this gorgeous image, pop by The East Wind Facebook group where they will be posting their awesome creations today. We would love to see what you create with her, too.