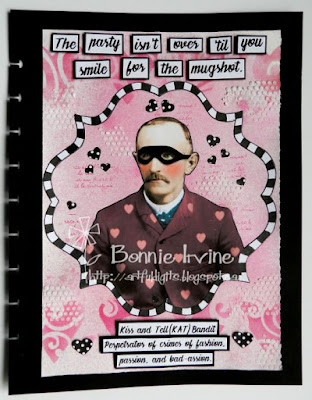 Hi everyone! I'm playing catch-up because everything came to a screeching halt when I got sick. Now I'm finally starting to feel better so I'm tackling various to-do lists. I skipped Week 3 with Barb's Art Journal Adventure prompt of "Mugshot" so that was first on my list of want-to to-dos. Barb did a very whimsical page with a wonderful hand drawn portrait inside a funky frame. I chose to create a page with a play on the idea of mugshot using a hilarious image from Hidden Vintage Studio's Love Bandits collection. 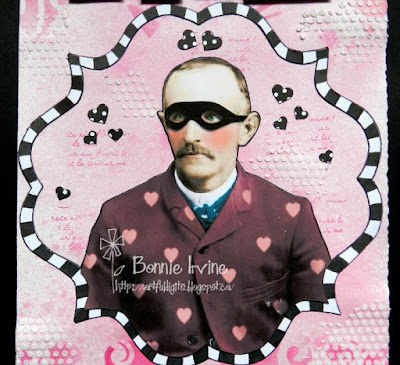 The background started as a 7x10 inch rectangle of mixed media paper onto which I spritzed Lindy's Cotton Candy Pink and Hottie Patottie Hot Pink Starburst Sprays. Once that was dry, two rows of hearts from Joggles Hearts Delight stencil were applied to the top and bottom of the background using Picked Raspberry Distress Ink and a mini applicator tool. Using the same ink, script was stamped inside the area where the frame would go. 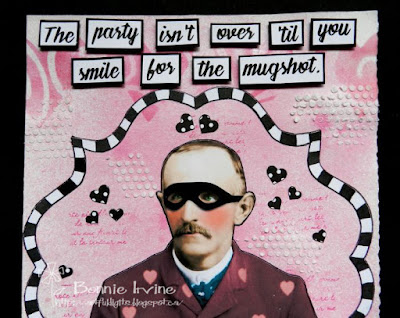 The frame itself was created by tracing a shape from a stencil onto a piece of white card stock and then hand sketching the same shape about 1/4 of an inch outside that stencilled line. The frame was then fussy cut inside and out. A checkered pattern was coloured in with a Pitt Brush pen and the edges blackened with a Black Big Brush Pen. The frame was set over the bottom of the fussy cut image and traced along the bottom to allow it to be fussy cut to the correct size and shape. Both the image and the frame were then adhered to the background. Hearts were punched from dottty paper and scattered around the bandit's head. 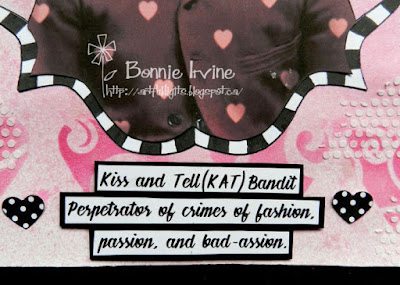 The sentiments were printed onto white card stock and cut apart, then matted with black card stock. The sections were then popped up with foam tape. Two larger hearts were punched from the same dotty paper and adhered to either side of the bottom message. Ranger Texture Paste was scraped through Joggles Punchinella Quintet Minis stencil in several places to add more texture, pattern, and dimension. Black Big Brush pen was used to edge the background before it was adhered to the black base.

Thanks for popping by today. I appreciate that but feel I must warn you....don't let the KAT Bandit fool you...he's a heart-breaker with his very own fashion sense. he's hard to resist...LOL. If you haven't already checked out Joggles 2017 Art Journal Adventure, be sure to do that on the Joggles blog. We also have an amazing group of talented, creative, and supportive group playing along and sharing their own creations on the Art Journal Adventure Facebook group. We'd love to see you join us!

This is such a fabulous page. I love the fun image, the texture and the super words. Glad you're feeling better too!