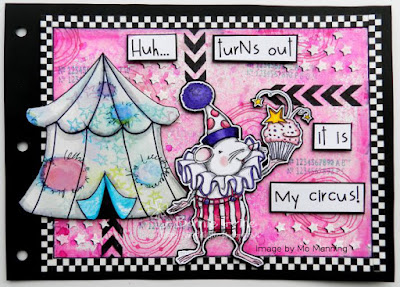 Hi everyone! It's Week 6 of the Joggles Art Journal Adventure and this week the theme sparks from one of my favourite sayings. The saying is "Not my circus, not my monkeys. My monkeys fly." Barb is suggesting that we feature monkeys, circuses, or anything else that saying inspires. I chose to go with the circus reference although there are no monkeys, flying or otherwise, on my radar. 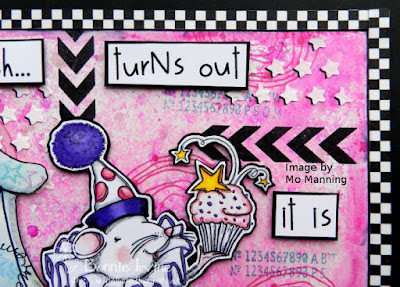 The 6x8 background was spritzed with Lindy's Hi Maintenance Magenta and Cotton Candy Pink Starburst Sprays. It's such an easy way to get colour on the page with a pleasing result. Once it was dry, one of the AALL & Create Dot Matrix stamps was applied to the background with Magenta Hue Archival Ink. The number stamp from Studio Light Memories of Summer set was applied with Garden Patina Archival Ink. The chevron was stamped with Jet Black Archival Ink and a stamp from 49 & Market Captured Adventures set, making sure that one was positioned to serve as a path to the tent. Ranger Texture Paste was scraped through My Favourite Things Graduated Star stencil. These stars were then shaded next to the left side with Neocolor II Purple crayon applied with a waterbrush. Once that was dry, black pen was used to outline the lower left side of each star. The same colour Neocolor II was used to shade next to the checked washi tape border once it was adhered. 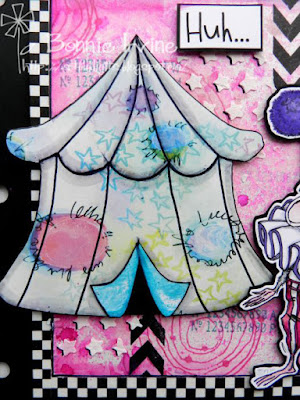 The tent was sketched from some internet examples and a cardstock pattern was created. This was used to fussy cut the tent shape from a piece of Art by Marlene packaging. Love that design and why waste it? I added a piece of turquoise inked mop-up paper to create the folded back tent flap and a piece of black cardstock was placed behind the opening. Once the lines were added with black pen to define the tent panels, Gray Big Brush Pen was used to shade it. The tent edged with Black Big Brush Pen and popped up on foam tape to create dimension and natural shadow. 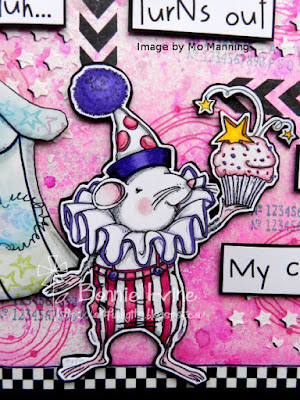 The star of this page is an image by Mo Manning (Mo's Digital Pencil) called Cupcake Mouse. I think he's as cute as can be and the closest I'm willing to get to a circus clown. I coloured this wee mouse with Polychromos and Prismacolor pencils using purple gel pen on his neck ruffle. He was fussy cut leaving a narrow white border, and matted with black cardstock. He was then trimmed out again leaving a second narrow border of black. This helps him stand out against the busy background and gives strength to those skinny lines holding up the stars. He was popped up on foam tape as well. 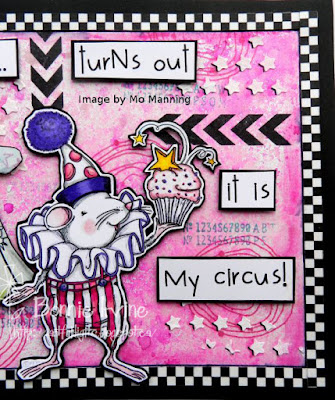 The sentiment, my tongue in cheek response to the saying, was printed on white cardstock using a Vera Lane Studio font called Baby Powder. The sentiment was cut into sections, matted with black, and popped up on foam tape. To finish the page, outlining with black pen was done next to the washi tape border before the page was adhered to the black cardstock which serves as a frame.

Thanks so much for visiting with Cupcake Mouse and me today. Be sure to pop by the Joggles AJA Facebook group throughout the next week to see how others in the AJA community respond to this prompt. We would love it if you played along.