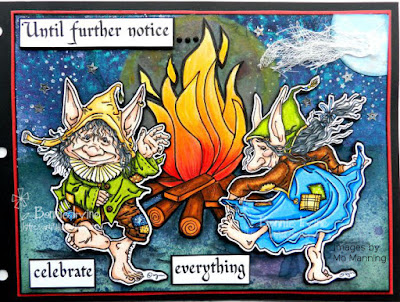 Hi everyone! It's Week 8 of the Joggles Art Journal Adventure and the prompt this week is Fire. We can feature flames, a colour palette based on fire, or anything else this prompt stirs up.The page I chose to create took me ages to complete because it was filled with intricate images to colour as well as layers and layers in the background. However, I love the outcome and enjoyed the process so I have no complaints. The page stars two digital images by Mo Manning (Mo's Digital Pencil) called Jerry and Mags. I love their joy and exuberance. 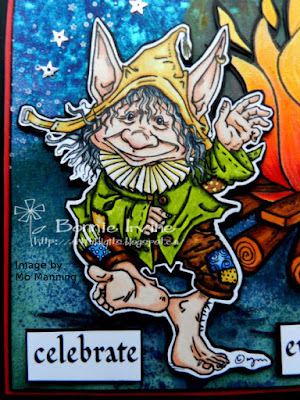 I coloured Mags and Jerry with a mix of Polychromos and Prismacolor pencils. 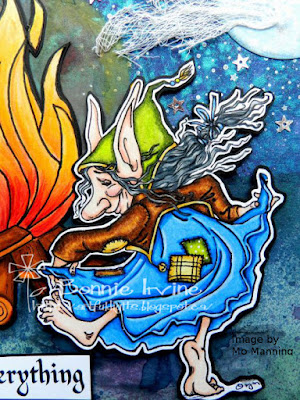 They were fussy cut leaving a narrow white border, matted with black, and trimmed out again leaving a narrow black border. Foam tape was applied to the back to pop them up and create a natural shadow. 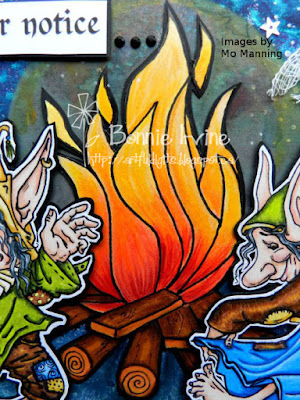 The campfire was a free clip art image which was printed onto white cardstock and then completely re-coloured with the same brand of coloured pencils used above. It was fussy cut and matted the same as Mags and Jerry. The tops of the flames were given a shine with Clear Wink of Stella. The background began as a 6x8 inch rectangle of mixed media paper which was spritzed with Lindy's Afternoon Delight Denim (mostly) and Sweet Violet Purple Teal, spraying heavier on the top half and much lighter on the bottom where the ground would be. 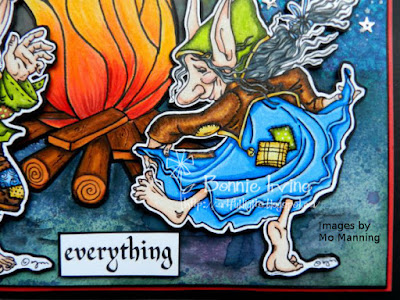 Once that was dry, a paper was used to mask off the sky area, leaving the grass open for inking with Evergreen Bough Distress Oxide and then Library Green Archival Ink. The sky was stamped using a Viva Las Vegas starry sky stamp and white Brilliance Ink. 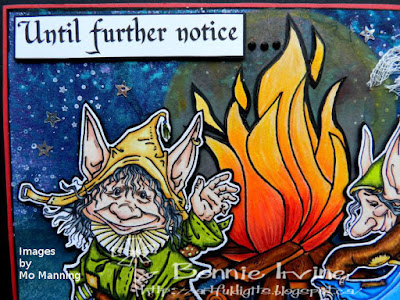 To create the glow from the fire, a circle template was used as a stencil. Scattered Straw and Mustard Seed Oxide Inks were stencilled through the circle opening. Inktense Pencils and Gelatos spread with a waterbrush were also used to deepen the glow. 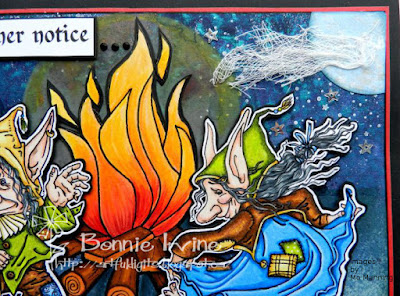 To give Mags and Jerry a full moon to dance by the light of... a semi circle was punched from a piece of mop up paper covered with spray inks. The edges were inked with Cornflower Blue Archival ink, glued to the corner and trimmed to shape. Clear Wink of Stella was used to give the moon a shine. A scrap of cheesecloth was used to create a cloud. Silver star sequins were adhered in several places once the fire was adhered flat to the page. The wording was printed onto white cardstock, trimmed into sections, and matted with black cardstock. Foam tape was used to pop up the wording. The outer edges of the page were darkened with black Big Brush Pen before the page was matted with red cardstock, and then adhered to the black background, common to all the pages.

Thanks for stopping by today. Mags, Jerry, and I are happy that you did. To see what the others in our Joggles Art Journal Adventure Facebook group create as a response to Prompt 8, be sure to pop over to the page. We would love to see you there!