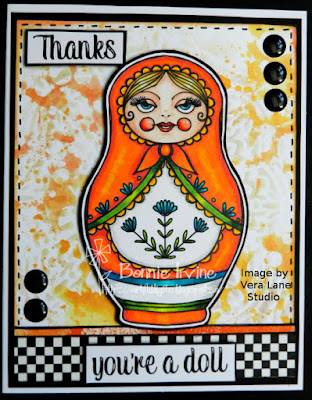 Hi everyone! It's hard to believe that this is the last week of my guest designing stint at Vera Lane Studio. The time, she flies :) For my first post this week, I am sharing a card I made with one of the beautiful Matryoshka images which were released on Monday. The set contains two lovely dolls and a sentiment. 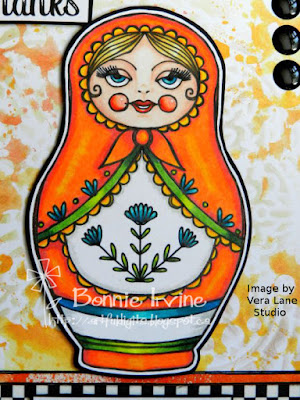 I coloured Mattie (the Matryoshka doll) with a mix of Polychromos and Prismacolor pencils. She was fussy cut (so easily) leaving a narrow white border, matted with black cardstock, and trimmed out a second time leaving a narrow black border. Foam tape was applied to the back to adhere her to the background as well as add dimension. 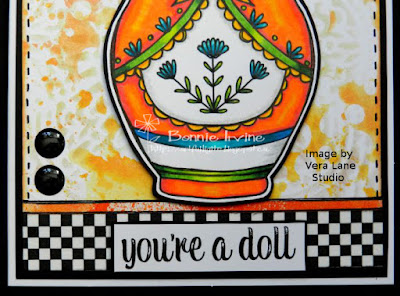 The background, a 4.5 x 6 inch rectangle of white cardstock was coloured with Abandoned Coral and Spiced Marmalade Distress Oxide Inks. These were applied to my craft mat, spritzed with water, and picked up by dipping the card into the puddles of ink several times. Once dry, the same ink colours were used to transfer the DecoArt Doily stencil design to the background using stencil brushes. I wanted a very light pattern and the stencil brushes achieve that look much easier than the blending tools. To give Mattie a place to stand, a length of washi tape applied to white cardstock was added to the bottom of the card front. A narrow strip of spray inked paper in orange hues was added to the top of the washi tape to make the base stand out and pull some of the bright orange from her dress into the background. 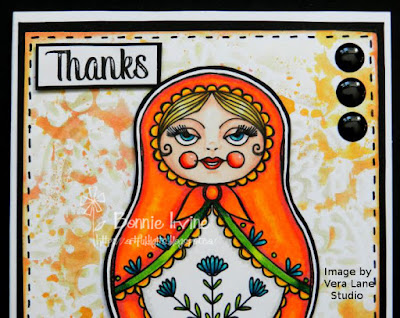 The sentiment I chose, instead of the one which came with the set, was printed onto white cardstock, chopped into sections, and matted with black. Foam tape was used to pop the sections up. Faux stitching was added to the outside edges which were then darkened with Tiger Lily Archival Ink. Large enamel dots were adhered to opposite corners before the card front was matted with black and adhered to the white card base.

Thanks for joining Mattie and me today. A special heartfelt thanks to Janet Klein for the opportunity to guest design for Vera Lane Studio. I had such a blast. A huge thanks also to the VLS Design Team who not only inspire me each week with their creativity and talent but are also wonderfully supportive. If you haven't already joined the Vera Lane Studio Facebook group, be sure you do. It's a great place to hang out!