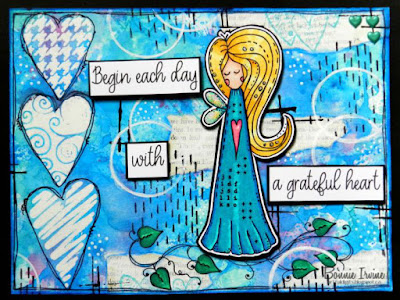 Hi everyone! It's Week 14 in the Joggles Art Journal Adventure and the prompt this week asks us to include hearts in our project. This was fun for me because I'm usually a star girl so I was able to pull out some things I don't use often. I included 5 different ways of featuring hearts and actually had ideas for more but held off...not like me at all :) 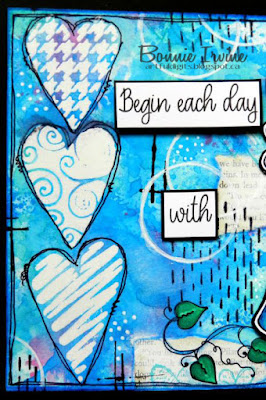 The 6x8 inch mixed media background was first stencilled by sponging Versamark Ink through the three hearts from TCW Complicated Hearts Stencil. They were then coated with white embossing powder and heat set to create a resist. Colour was added with Peacock Feathers, Salty Ocean, and a little Seedless Preserves Oxide Inks applied to the craft sheet one at a time and spritzed with water before dipping the background into the puddle. This was dried between colours and was repeated a few times to create more depth from layering. Torn book text was added and white gesso was used to knock back the writing so it was less visible. 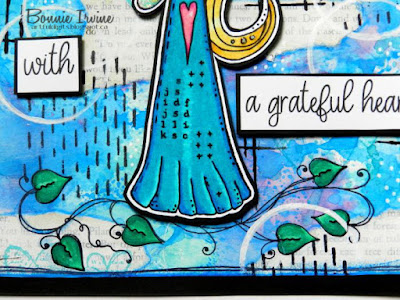 More patterning and texture were added with stamping: Forget-Me-Not Archival on Carabelle Mini Textures hearts and Jet Black Archival on a stamp from the Carabelle Studio Grungy Patterns set. Black gesso was applied with a gift car to create lines. To create a place for the angel to stand, a vine with heart shaped leaves was stamped on the background with Jet Black Archival Ink and again on white cardstock so that the leaves could be coloured with pencils, cut out, and adhered over the ones on the background. Inktense pencil activated with a waterbrush was used to shade under the vine and leaves. White gesso rings were added with a bottle lid. 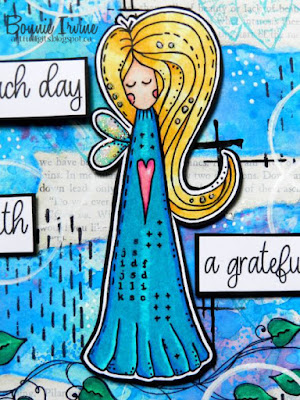 The sweet angel is one of the Kate Crane images from Carabelle Studio Angels stamp. She was inked with Jet Black Archival onto white cardstock and coloured with Prismacolor and Polychromos pencils. Diamond Stickles were added to her wings and the dots in her hair. She was fussy cut leaving a white border, matted with black, and fussy cut again leaving a black border. Foam tape was used to adhere her to the background. Love these Kate Crane stamps!! 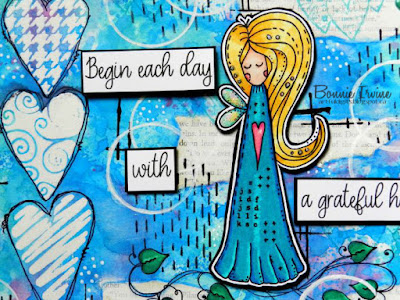 The wording was printed onto white cardstock, cut into sections, and matted with black. Foam tape was used to adhered them and add some dimension. To add a little more detail and some brightness, white Posca Paint Marker was used to make some dots in a few places. A border was doodled around the outside edges with black pen and Blueberry Gelato was used to darken the area between the doodled border and the outside edge to serve as a frame and also around the embossed hearts to help them stand out. Black Big Brush Pen was used to colour the white edges of the background before it was adhered to the black page which frames each spread in this journal. The final touch to balance the design was to add three puffy metallic stars to the upper right corner.

Thanks for joining my angel friend and me today. We appreciate that. We would love to have you join us in the Joggles Art Journal Adventure Facebook group. It's a wonderful group of creatives who are talented, supportive, and friendly.