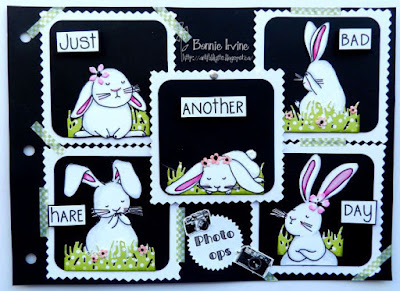 Hi everyone! We are just around the corner from Easter as I'm sure you have noticed by all of the tempting chocolate you see in the stores. As a nod to that, the prompt for Week 15 of the Joggles Art Journal Adventure is Hey Chickie. We are to include chicks and/or bunnies in our project. I love rabbits so this was an easy choice for me. We do have them as frequent visitors to our yard and I am forever trying to capture them in a photo...or two...or three. Sometimes they cooperate and sometimes not so much. That's what inspired this art journal spread today. 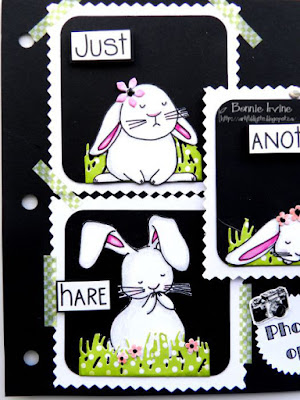 I began with these wonderful doodled bunnies which I had in my digital collection from an Etsy shop called Artpavo. They were originally done in pink ink and were the cutest line drawings with no shading. I sized  five of them to fit my photo frames, printed them onto white cardstock, and set about adding my own details. The shading was done with coloured pencil and I outlined them with black Pitt pen. They were then fussy cut and the edges were darkened with black Big Brush Pen to get rid of the white edges. I chose bunnies who looked like they didn't want their pictures taken to go along with the story I imagined. 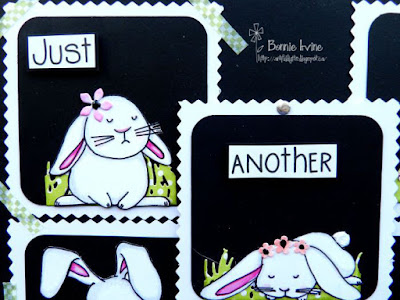 The photo frames were 3 1/8 inch squares cut from white cardstock using decorative scissors to give that retro edge photos used to have. A corner roundeed square was die cut from black cardstock to fit inside the white frame leaving about .25 inch border on all sides. The black square was centered on the white frame and adhered with Scor tape. I wanted my bunnies to have some lovely grass to ground them so I die cut dotty green paper which I glued either in front of the bunnies or behind them. 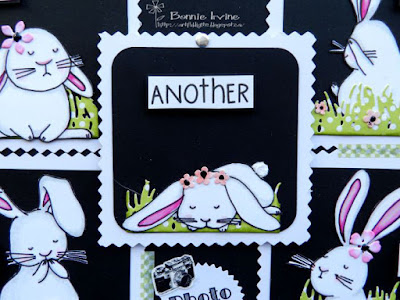 Tiny pink flowers were punched from gel printed scraps and Nuvo Crystal Drops were used to create the centers. These were adhered to the grass where it was in front of the bunnies and also to the center bunny's head. Two other die cut flowers, a gift from a friend, were inked with Picked Raspberry Distress Ink, dotted with black Nuvo, and adhered to the two bunnies who had no flowers. 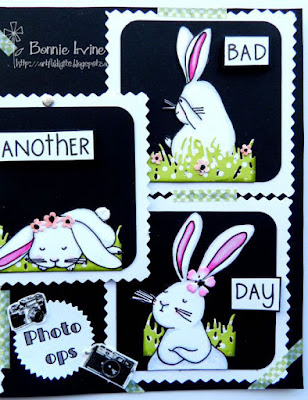 The wording (and yes, I know these aren't really hares) was printed onto white cardstock, matted with black, and popped up on foam tape. The same tape was used to lift the center "photo". The photo ops sign was cut with a TH label die and the two cameras are washi tape adhered to white cardstock and fussy cut. Bits of green checked washi tape were used to embellish the photos to look like they were used to adhere them to the background. A silver nail head embellie was adhered to the center bunny's frame to give the appearance of it being tacked to the page. 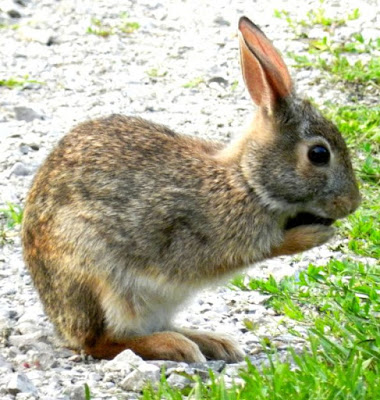 My goodness, I had fun playing with these guys and creating this page. I imagined me asking them to look at the camera, say cheese, and all those other  things you do with a reluctant photo subject. Above is a photo of one of the bunnies who visits our yard and is not camera shy. To see how some of the others in our wonderful Joggles Art Journal Adventure group respond to this prompt, be sure to pop over to the Facebook group. They never fail to inspire and delight me with their creativity.