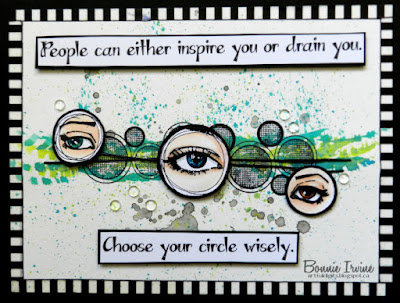 Hi everyone! We are quickly approaching the half way mark both in the calendar year and in the Joggles Art Journal Adventure prompts. Week 23 was inspired by the fact that today is National Yo-Yo Day so we are asked to feature something(s) round (yo-yo or not) or some string or both if the spirit moves us. I decided on circles, some leather "string", and a quote about circles. I also consciously chose to leave white space in my design because that always challenges me...if I don't purposely do it, it rarely happens :) 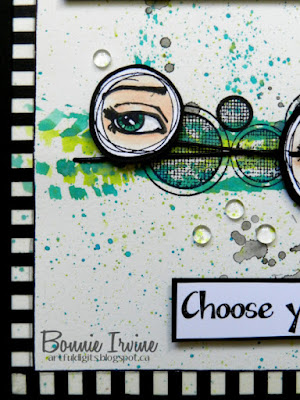 I began with my usual 6x8 inch rectangle of mixed media paper. Twisted Citron Distress Oxide was sprayed onto the craft sheet along with a little water, and then tapped in a horizontal line using a rake brush. It was also flicked onto the page to leave dots of various sizes. Once the Twisted Citron was dry, the process was repeated with Peacock Feathers Distress Oxide Spray, again flicking the rake brush to add the dots after the horizontal lines were added above and below the first colour. The sprays were allowed to dry thoroughly before Carabelle Studio Du ronds et du texte stamp was added across the horizontal lines using Jet Black Archival Ink. To emphasize a few of the circle borders, black Pitt Pen was used to colour some frames in. 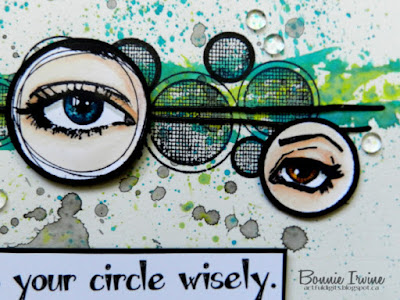 I wanted a strong black horizontal element to contrast with the bright colours and to tie in with the black stamping. Tiny holes were made and two lengths of fine leather string were added, criss crossing them off center and tucking the ends through to the back where they wouldn't show. Black gesso was watered down until it was more translucent and then splattered across the page using the rake brush. Extra pools of black were soaked up with paper towel to keep these dots light and somewhat see through. Circle stamps from Eileen Hudson Bokeh Dots set were combined with Jane Davenport and Visible Image eye stamps to create more Jet Black Archival circles. These were first colourized with Jane Davenport watercolour to lay the skin tone in, and then further shaded with coloured pencil. They were fussy cut, matted with black cardstock, and popped up on foam tape. 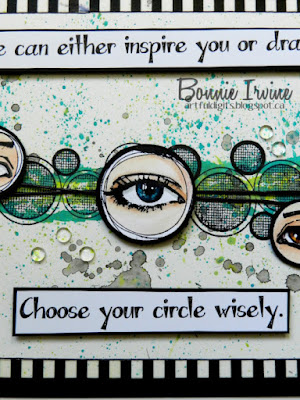 The sentiment was printed onto white cardstock and divided into two sections which were matted with black, and popped up on foam tape. A border was added around the outside edges with black and white striped washi tape. A few more circular elements were added in the form of clear domed Dew Drops which batch the light and magnify what is under them. To finish the page, black Big Brush Pen was used to edge the background before it was adhered to the black base common to all the pages in this journal.

Thanks for stopping by today. If you are thinking of playing along with the Joggles AJA weekly challenge, it's not too late. There's no pressure to catch up or even keep up and it's a fabulous group of creatives who have become friends and supporters through our Facebook group. We would love to have you join our community.