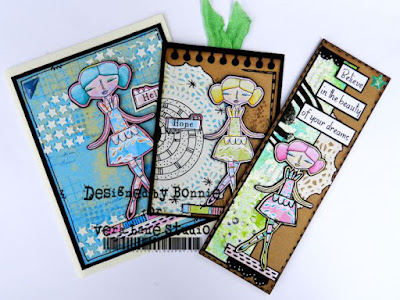 Hi everyone! I am so excited. This is my first official post as a member of the Vera Lane Studio Design Team. I have long been a fan both of Janet's wonderful images and also of her creative team who have provided me with inspiration galore, encouragement aplenty, and from whom I have learned a ton. I am both delighted and incredibly honoured to have been asked to join them! Speaking of inspiration, have you seen the new Pretty Ladies Collage Sheet in the Vera Lane Studio Etsy shop?  Oh my word, it's gorgeous and so versatile. Not only are there various sizes of the pretty lady but also various colourways, plus there are bits of border to act like washi, and sweet words, as well. I created three quick and easy projects to show just a few ways they can be used but the mind boggles with the possibilities! 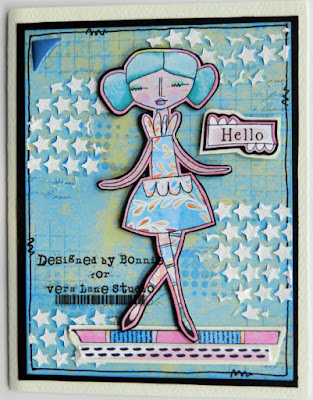 The first creation I made was a notecard. I used a 3 5/8 x 4 3/4 inch rectangle of designer paper, matted with black cardstock as my background. Texture was added by applying French Ultramarine Archival Ink to Crafty Individuals Script stamp, Studio Light grid stamp, and Indigo Blu Tasty Textures dotty stamp, adding them to the background in several places. Ranger Texture Paste was scraped through TCW Punchinella stencil. The paste was brightened with white Posca Pen once dry and shaded next to using Inktense pencil and a waterbrush. The pretty lady was fussy cut leaving a narrow border, matted with black, and fussy cut leaving a narrow black border. She was then popped up on foam tape and grounded with two of the border strips added to cream cardstock. The Hello word was also matted with black and cream and adhered with foam tape. The final details before adding the background to a cream card base were a doodled border and a puffy triangle sticker.

The second project featuring another Pretty Lady from the collage sheet is a 6 x 2 inch bookmark. The base is a double layer of kraft cardstock which was edged with Coffee Archival Ink and a doodled faux stitching border. A left over scrap of gel printed, stamped, and Texture Paste background from a previous project was adhered to the left side with a piece of a small doily peeking out from its right side Both of these were outlined with black pen to help them stand out. The Pretty Lady collage image was fussy cut leaving a narrow border, matted with black, and trimmed out again leaving a narrow black border. To ground her, a length of the dashed border from the collage sheet was adhered beneath her feet along with a left over scrap of punched scalloped border. The other section of this same border was added to the top of the gel printed piece to repeat the element. White dots were added to both borders. The wording was printed onto white cardstock, cut into sections, and matted with black. A small puffy star was added to the top right corner and black Big Brush pen darkened the edges. 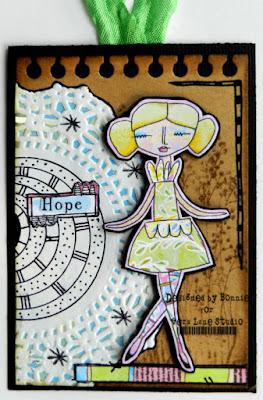 The third and final project I created using one of the Pretty Ladies from the VLS collage sheet was a tag which could easily be a card focal. The kraft cardstock base was one already in my stash and cut with a Spellbinders Office Supply die. It was patterned using Inkylicious Rye Grass stamp and Coffee Archival in a couple of layers varying the intensity of colour to create depth. The other piece of the doily used previously was adhered to the same blue patterned paper as I used in the card front, and then trimmed out. The asterisk stars were stamped on the solid circles of the doily and the center was doodled with black pen. The mounted doily was then adhered to the left side of the kraft die cut. One of the 3 1/4 inch pretty ladies was fussy cut and matted in the same way described above, and popped up on foam tape. She was grounded with one of the striped borders from the collage sheet which was then outlined with black pen. The word hope has fussy cut and the loops of the scallops were doodled with black pen before it was adhered beside her and outlined to help it stand out. A simple partial border was doodled on the right side of the tag before it was adhered to the black background. Green seam binding was used for the topper.

Thanks for joining the Pretty Ladies and me today. I still have many of the collage sheet images left so I'm thinking of creating a few more of the cards to give as a set of five for a little gift for a friend. They are so quick to create and I know she'll just love them. To check out the other fabulous collage sheets and the plethora of fabulous images by Janet Klein, be sure to pop by the Vera Lane Studio Etsy shop. I always come away with a bunch of new ideas and several must-haves :) For even more inspiration, check out the VLS Facebook group where there is always something new and drool-worthy.