That's How I roll...inspired by Vera Lane Studio images 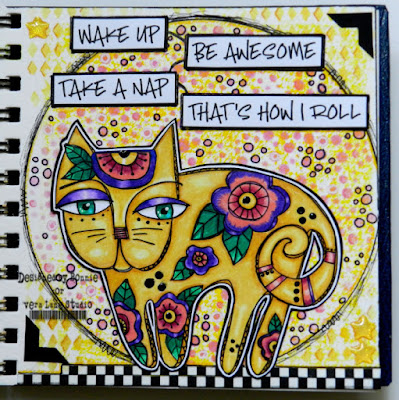 Hi everyone! Have you had a chance to check out the new Love of a Cat digi set from Vera Lane Studio? I am smitten with the two cats because they offer so much opportunity for colour and you know I'm all about that :) Besides the two sweet cat images, there is a beautiful saying which is perfect for cat lovers. Of course, I went in a different direction with my sayings on my two projects because....that's how I roll...LOL. 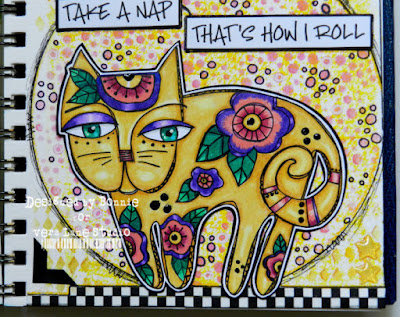 For my art journal page, I coloured the Floral Cat with Prismacolor and Polychromos pencils using black Nuvo Crystal Drops to add dimension and shine to the larger black circles. She was then fussy cut leaving a narrow white border, matted with black cardstock, and trimmed again leaving a narrow black mat. This helps her stand out against my usually busy background. 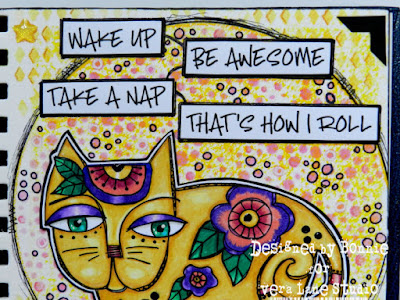 The 6x6 inch background was first brayered lightly with Golden Hansa Yellow Medium Fluid Acrylic paint. Believe it or not, I left white spaces but subsequently filled them with pattern, pattern, and more pattern. Picked Raspberry Distress Oxide Ink was applied over the yellow through TCW Microbial stencil where the openings follow a circular shape. To outline the circle and make it more pronounced, a small plate was first traced around the stencilling with a Pitt pen. Freehand sketchy lines and scribbles were added to the initial circle using a much finer pen. Some of the pink dots were outlined with black pen, some with white pen, and still others were shaded with pink coloured pencil. Using another tracing of the same plate, a mask was created to cover the inside design of the large circle so that stencilling could be done in the four corners of the page. Sunflower Archival Ink was sponged through Steamperia Steampunk Man's harlequin design and then shaded with coloured pencil on the left side.

To give Floral Cat a place to stand, two thin strips of black and white checked washi were adhered to the bottom of the page and outlined with black pen. The wording was printed onto white cardstock, cut into sections, and matted with black. Two black photo corners were punched and added to the upper right and lower left. On the opposite corners, sparkly puffy star stickers were adhered to show Floral Cat's awesomeness :) Black Big Brush Pen was used to outline the edges of the page to serve as a frame. 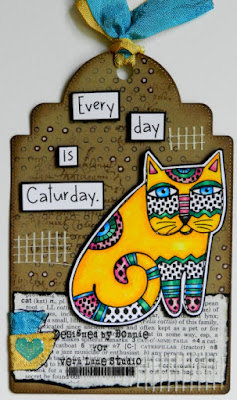 My second project using Patterned Cat from the same VLS set is a 3.25 x 5 inch die cut kraft tag with a tiny pin punched border as part of the die design. The background was stamped with script from Indigo Blu Tasty Textures set as well as Wendy Vecchi Open Dots background stamp. Both the stamping and the inked edges were done with Coffee Archival Ink. A few of the dots were coloured in with white coloured pencil and outlined with a brown Sharpie marker. 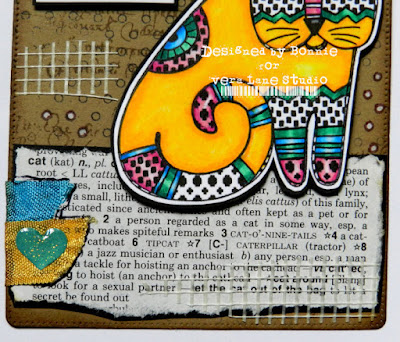 A dictionary definition for cat was torn out and adhered to give Patterned Cat a place to sit. Scraps of drywall mesh were adhered and both the wording and the colouring/matting were done the same as above before the cat and words were popped up on foam tape. Once the two colours of seam binding were added as a tag topper, two of the bits cut off were glued to the left side of the tag, overlapping the book text. A green puffy heart sticker was added to pull some of the green from the image into the background.

Thanks so much for popping by today. My feline friends and I appreciate it. To check out other fabulous projects created with these images by my talented teamies, be sure to pop by the Vera Lane Studio Digi Stamps Facebook group. Every day there is new and wonderful inspiration and creations posted there.