Hi everyone! I love the style of the last two Vera Lane Studio releases...fabulous female images with an edge. That Janet Klein is one talented artist! For today's DT post, I created a tag with Blondie and an art journal page with Sabrina because ...why not! 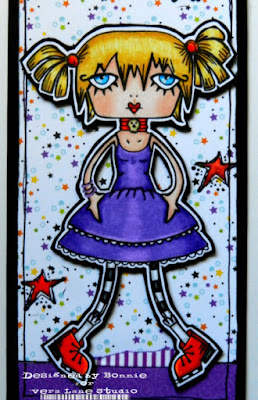 I coloured both images, as well as the skull from Blondie, with a mix of Prismacolor and Polychromos pencils and keeping the colour palette similar for both. 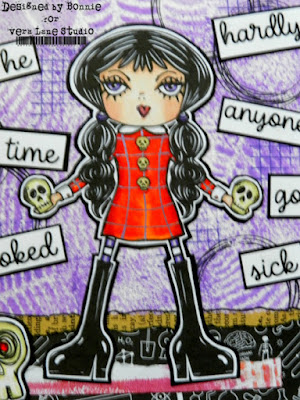 A check pattern was added to Sabrina's dress with a purple metallic gel pen. Both images were fussy cut leaving a narrow white border, matted with black cardstock, and fussy cut a second time leaving a second narrow border. Blondie was popped up with foam tape and Sabrina was glued flat to the background. 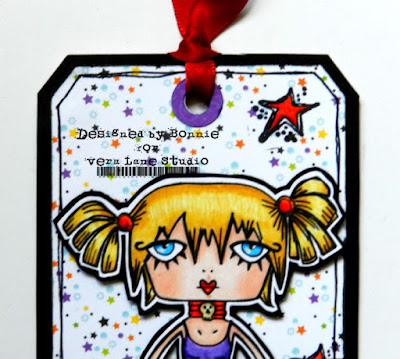 The tag background was easy peasy. Designer paper was cut into a tag shape and bordered at the bottom with a strip of purple patterned paper as well as a scrap of striped washi. A reinforcement was cut from the same purple paper to pulll that colour into the top of the tag. A small star was stamped in three places with Jet Black Archival and coloured in with red pencils to pick up the red from Blondie's shoes and accessories. 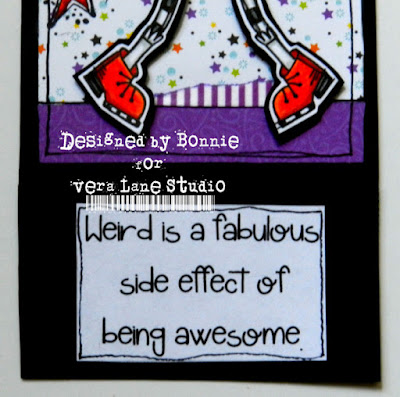 The tag background was matted with black cardstock and a second section was cut the same width as the tag but only 1.75 inches deep. The sentiment was printed onto white cardstock and adhered to this small hanging piece which was attached to the tag base with black thread so that it moves. Red satin ribbon was added as a tag topper. 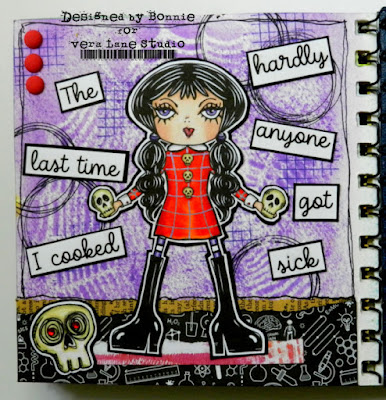 The background of the art journal page where Sabrina was destined to live was brayered with Wilted Violet Distress Oxide to cover it lightly. Carabelle Studio Spider Web stencil was set on top of the background and the same ink was used to add more colour through the openings. Deep Purple Archival Ink was used to apply a VLV grid stamp as well as an Ellen Hutson Bokeh circle stamp. 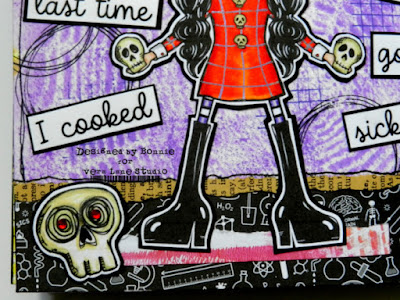 To give Sabrina some ground, a strip of vintage dictionary paper was adhered behind a torn strip of black and white Halloween paper with a mad scientist theme. A strip of red gel printed paper was layered over that to anchor those awesome boots. The skellie head from the Blondie image was given red gem eyes and adhered beside Sabrina's feet to repeat the skulls in her hands and on her dress. 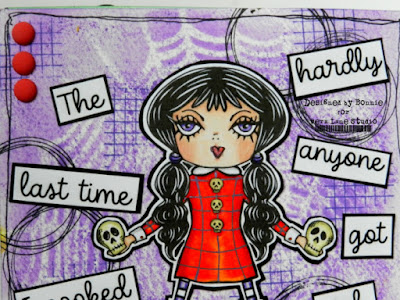 Three red epoxy dots were added to the top left corner to bring a little of that red to the top of the page. The sentiment was printed onto white cardstock, matted with black. A simple black doodled border was used to finish the page.

Thanks for joining Blondie, Sabrina, and me today. That was awesome of you! When you get a chance, pop by the Vera Lane Studio Facebook group to see what others have created with these two wonderful images.You won't be disappointed :) Both are available along with many of their friends in the Vera Lane Studio Etsy shop.