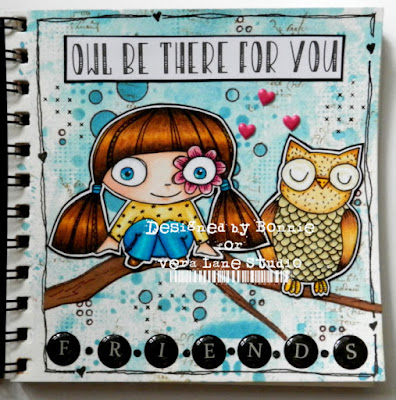 Hi everyone! I am smitten with the newly released Be Wise image set at Vera Lane Studio. The owl and the little girl are such sweet friends so I was excited to showcase that. 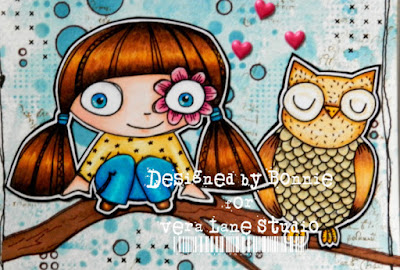 I coloured both images with Prismacolor and Polychromos pencils. Tiny Xs were added to her little yellow shirt. They were then fussy cut leaving a narrow white border, matted with black, and fussy cut a second time leaving a narrow black border. A tree branch was free handed and cut from brown patterned paper. It was edged with Coffee Archival Ink, lined and edged with brown Sharpie. 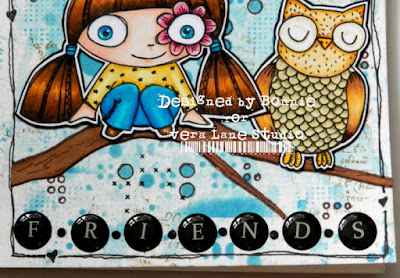 Broken China Distress Oxide was applied to a 3x3 inch gel plate, spritzed with water, and transferred onto the 6x6 inch watercolour paper background, lifting and plunking it down several times. It was allowed to dry thoroughly amd more of the same ink was applied through AALL& Create Lotza Dots stencil. The brown Sharpie was used to outline several of the circles as well as creating little clusters of the tiny ones in different places. Xs were added to the background by using a black Pitt Pen through an Alexander Renke stencil. Text stamping was added here and there with Coffee Archival ink and an Indigo Blu Tasty Textures stamp. The branch was adhered to the background and the two amigos adhered to the branch. 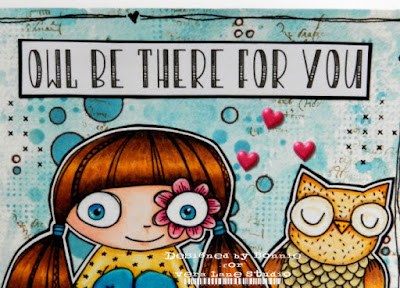 The wording at the top of the page was printed onto white cardstock and matted with black cardstock. The word, Friends, was added with stickers separated by punched black dots to mimic the tv show logo. The page was finished by doodling a little heart and line border which serves as a frame and by adding three little pink hearts to replicate the hearts on the border.

Thanks for joining Wendy, her owl friend, and me today. We are delighted you came by. When you get a chance, be sure to pop by the Vera Lane Studio Etsy shop where you can fin the Be Wise image set as well as a plethora of other images sure to inspire you. Stop by our VLS Facebook group, too. There is wonderful inspiration on a daily basis! See you there!