You Can't Make me! - inspired by a Vera Lane Studio image

Hi everyone! Did you see the amazing digi set released by Vera Lane Studio yesterday? It's called What the Fluff? She comes with two different hats, and the sentiment and I love her edgy style. I decided to create a tag cut from a gel print where she could express herself. 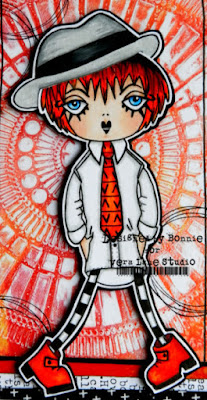 I coloured the image and the fedora hat with Prismacolor and Polychromos pencils using a simple palette of colours for her clothing and hair. She was fussy cut leaving a narrow white border and the hat was fussy cut the same way except that I cut it tight to the black line along the bottom edge. I didn't merge the images because I wasn't sure what angle I wanted to place the hat until I was finished colouring and cutting. The hat was glued at a rakish tilt with the brim ends tucked under her hair. Then she (with hat in place) was glued to a black piece of cardstock, and fussy cut a second time leaving a narrow black border. Foam tape was attached to the back to pop her up. 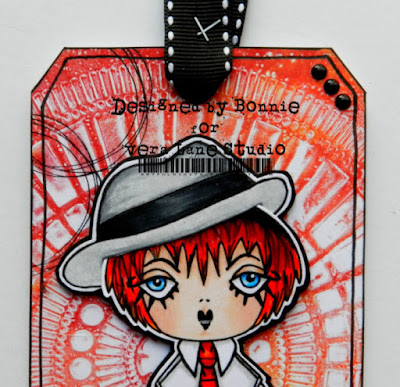 I cut the tag shape from white cardstock, making it a little longer than a standard #8 tag. The gel print was adhered to the white tag base with the center of the circle as centered behind her as I could get it. I like the way it radiates out from her. A few Bokeh Circle stamps were added with Jet Black Archival Ink.

To ground her, a layered piece consisting of orange and red packaging, text printed paper, washi tape, and a Snarky Small Talk sticker was placed at the bottom of the tag, backed by a piece of black cardstock to set it off. A simple border was doodled around the tag and the edges were darkened with Black Big Brush Pen. Three black enamel dots were placed in the upper right corner and black ribbon with white stitching was added as the topper.