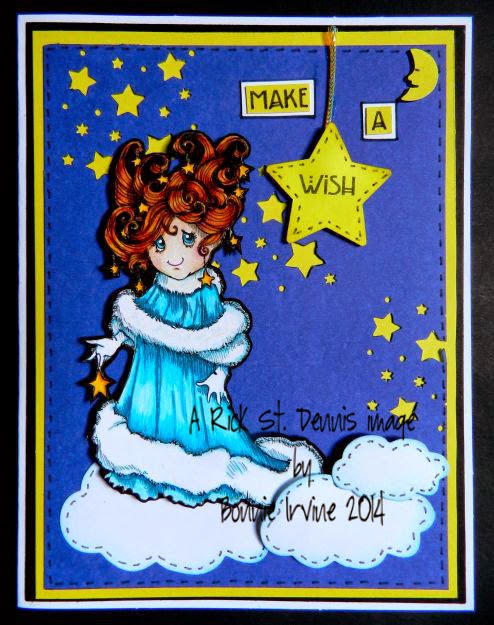 Hi guys! Did you see all of the new images that were released by Rick St. Dennis on the weekend? We had a Mega Release Party on Facebook and did a blog post featuring some of them on Saturday. I am absolutely smitten with them...so inspired and so many ideas zinging around in my head. Anyway, today marks the midway point in the Rick St Dennis Progressive Challenge on the Sparkle and Glitter blog so I just had to play with another of the new releases. 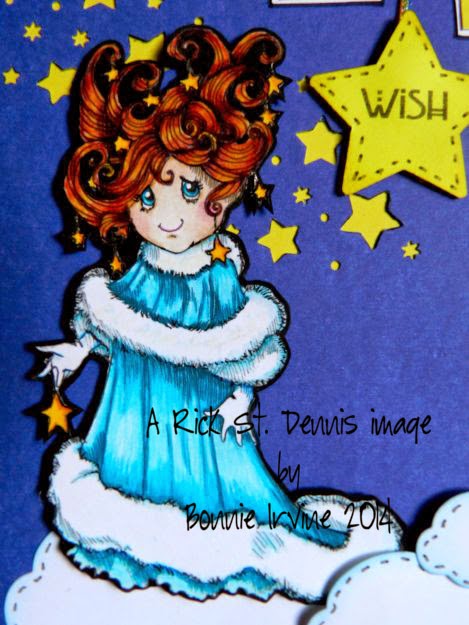 I chose Sally Stardust who is an absolute cutie patootie. I coloured Sally with Prismacolor pencils, adding metallic silver gel pen for the star strings. She was then fussy cut, matted with black cardstock, and popped up on foam tape. 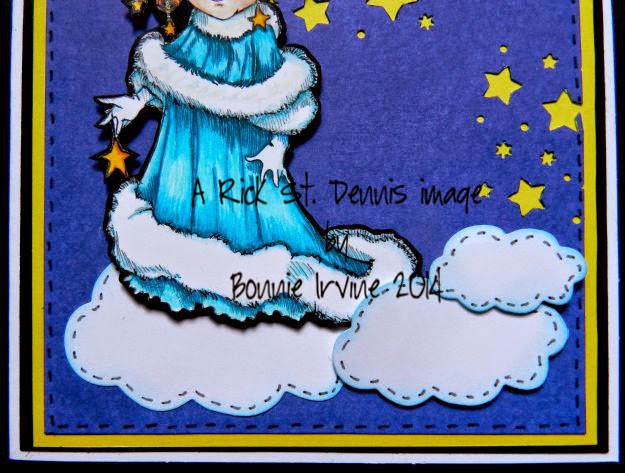 The background began with a white card base followed by a layer of black and then bright yellow cardstock, each slightly smaller than the one before. The top layer was created with purple cardstock which was punched three times with a Martha Stewart punch to create the star shaped openings. These allowed the yellow to shine through...so fun. I darkened the edges of the cutouts with a purple Big Brush pen so that the white of the cut paper disappeared.

The clouds were cut from white cardstock with an MFT die. They were then inked around with Tumbled Glass Distress ink, faux stitched, and the smaller two were popped up on foam tape. Sally was placed on the card so that she was standing (or is that dancing) on the largest cloud. A small man in the moon was punched from both yellow and black cardstock and offset before being glued in the top corner. 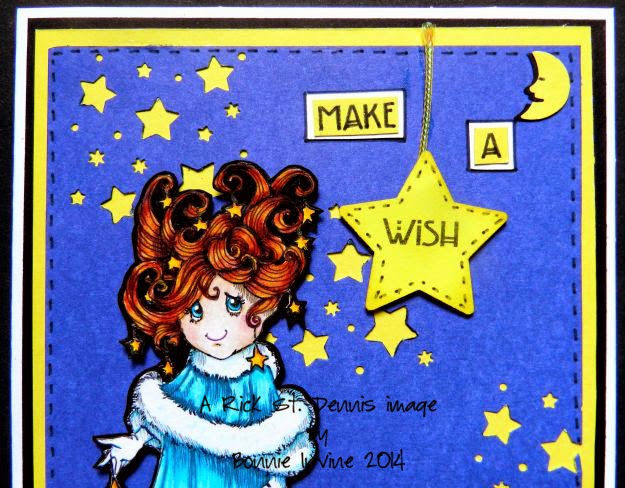 The sentiment was computer generated and printed on the same yellow cardstock. The word wish was punched with a larger star, faux stitched, and popped up with foam tape. A length of sparkly twine was added to the top of the star as a string.The other two words were matted in white and them outlined with black pen. Faux stitching was added to the edges of the purple layer to tie in with the other stitching and complete the design.

Thanks so much for joining Sally and me today. We both appreciate that. As a matter of fact, she's on cloud nine...LOL. Just a reminder of how the Progressive Challenge works in case you want to play along. The first month, which is September, features a theme and any Rick St. Dennis image is allowed as long as the theme is followed. For those who play along in the September Challenge, the free image will be given to them for the October round of the challenge. If you don't play in September, you will still be able to enter October's round, if you purchase the October image. This month our theme for the Progressive Challenge is Anything Goes with an RSD image. I hope we see you there! And remember to check out all of the new fall images in Rick's Zibbet and Etsy shops.