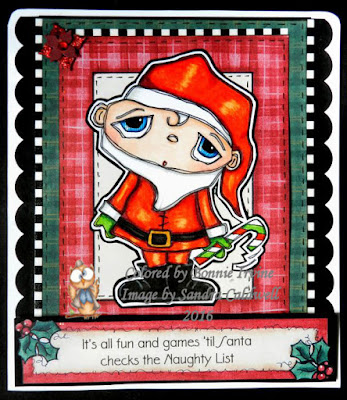 I'm baaaack! I was lucky enough to be able to play with a second new release from Sandra Caldwell this week. This one is called Lil Santa #728. I absolutely love the expression on his little face and found a wonderful saying that seemed to fit perfectly. 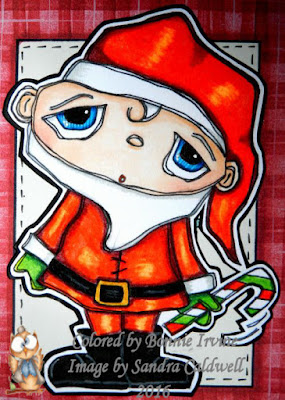 I coloured Lil Santa with Prismacolor and Polychromos pencils and fussy cut him leaving my usual narrow white border. He was then matted with black cardstock and fussy cut again leaving a black border. Once the background was completed, Lil Santa was adhered flat to make the card easier to mail. 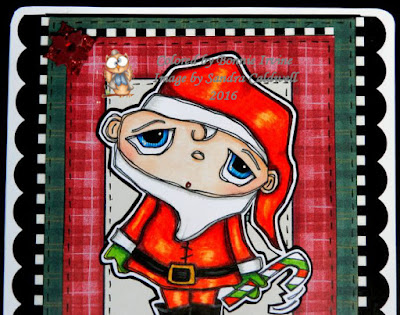 Three rectangles of patterned paper were layered over each other and faux stitching was done on each layer around the edges. This triple layer was then adhered toward the top of the white card base and two die cut black scalloped borders were adhered to each side. Thin strips of washi tape over white cardstock were layered over the borders and at the top of the background. 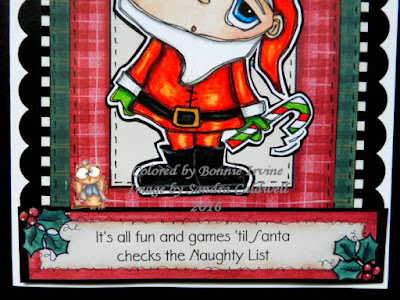 A frame was fussy cut from the same designer paper pack and then the saying was printed onto it from the computer. It was matted with black and popped up on foam tape for dimension before layering it over the bottom of the card. The final touch was to add Stickles and a red gem to one of the two layered flowers and add that to the upper left corner to balance the design and add a little sparkle to the card.

Thanks for popping by today. Lil Santa  will put you on his Good List, for sure :) To see more of Sandra's new releases which will be available later today in her Babycakes Digis and Designs Etsy shop, be sure to pop by the Sandra Caldwell Stamp Fans Facebook group. My talented teammates will be posting their wonderful creations with this weeks newbies throughout the day.
Posted by Bonnie Irvine at 07:05