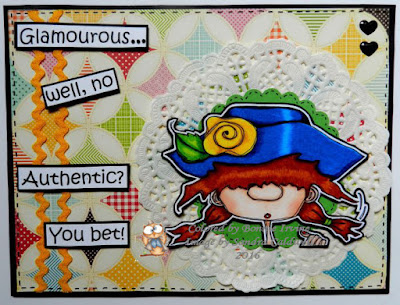 Hi there! It's Monday New Release day at Sandra Caldwell's Etsy shop, Babycakes Digis and Designs (babycakesdnd). Today I am playing with an image which I can relate to :) She is called Raggedy Gal 726 and when I saw her I thought of that saying "Ever feel like a Raggedy Ann in a Barbie Doll world?" 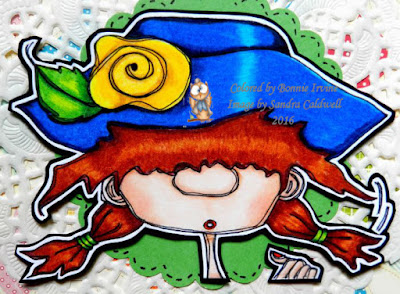 I coloured Raggedy Gal with Prismacolor and Polychromos pencils, adding a tiny black pearl at the center of the flower just for fun. She was fussy cut leaving a narrow white border and then matted with black and trimmed out again. She was then popped up on foam tape to create dimension and natural shadowing. 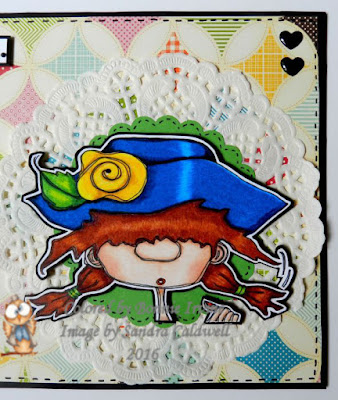 I wanted the background to be kind of homespun and simple so I chose some quilt patterned paper for the 6 x 8 inch rectangle. A large white doily was layered behind Raggedy Gal and a scalloped punched circle of green cardstock was layered over that. Faux stitching was added to the outside edge to go with the quilting theme. It was also added to the outside edges of the quilt paper using a black pen. Two black enamel hearts were adhered to the top right corner. 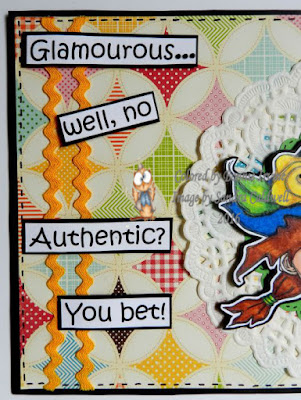 The sentiment, which sis me to a tee, was printed on white cardstock, matted with black cardstock, and popped up on foam tape. Three tiny black rhinestones were added to cover the three dots after the word glamourous. To complete the page, a black mat was added to the back to frame it.

Thanks for stopping by to visit Raggedy Gal and me. We are happy as heck you did that :) Be sure and pop by Sandra Caldwell Stamps Fans Facebook group today to see the other wonderful new releases she has for us this week. They are delightful and the DT will post their awesome creations  featuring them throughout the day. To check out the rest of Sandra's inspiring images, pop over to her Etsy shop, Babycakes Digis and Designs.  There's something for everyone there!