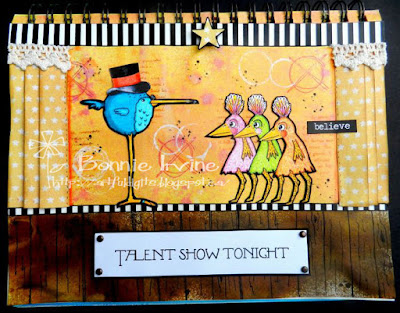 Hi everyone. Barb's prompt for Week 32 of the Joggles Art Journal Adventure is Divide and Conquer...your background. She covered up one section of the background and added colour to the other section. Then she reversed the process and added a border to mark the divide. I decided to flip the sections so that the smaller section was on the bottom because I wanted it to look like a gym stage where a talent show was taking place. 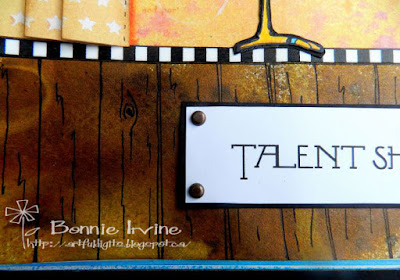 I covered the bottom third with scrap paper and spritzed the top 2/3 of the page with Lindy's Yellow Rose of Texas, Marigold Yellow Orange, and Hottie Patottie Hot Pink Starburst Sprays.Once the top section was dry, the scrap paper was used to cover it so that Butterscotch Adirondack Color Wash and Tattered Angels Tattered Leather Glimmer Mist were spritzed onto it. Once that was dry, a black Pitt pen was used to divide the bottom into wooden boards and also to create the woodgrain lines. 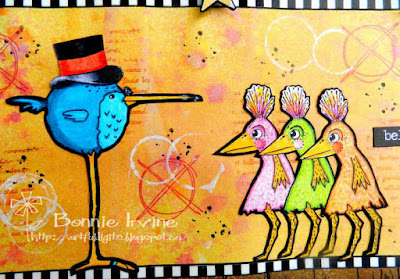 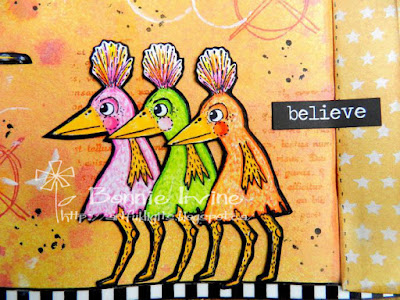 I chose Joggles The Bird Edgar rubber stamp to use for the MC of the talent night. The talented trio are the Joggles Loretta rubber stamp used three times. All were coloured with a mix of |Prismacolor and Polychromos pencils. They were all fussy cut on the lines and the Lorettas were overlapped to look like they were standing beside each other and at an angle to the audience. 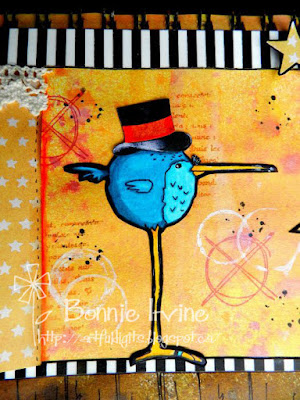 Both Edgar and the Loretta trio were then matted with black cardstock and fussy cut leaving a narrow border. They were adhered to the background leaving a space on each side. Edgar was given a clip art top hat to which I added an orange-red hat band...just for the occasion. 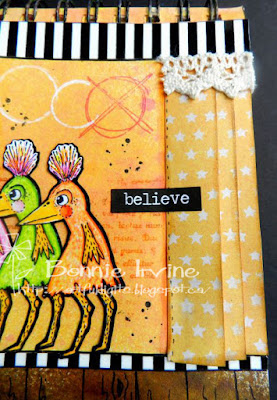 Black and white washi tape was adhered to white cardstock to take away the translucency. One length was adhered to the top of the page and a skinny piece was used to mark the stage area where my friends would stand. Starry patterned paper was cut and accordion folded to create curtains for the stage. The folds were edged with Vintage Photo Distress Ink to help them show better and faux stitching was added to the inside edges. They were adhered at the top and half way down so that the bottom would be loose. Two lengths of crocheted lace were added to the curtain tops. A punched and matted star was added to the washi tape border . 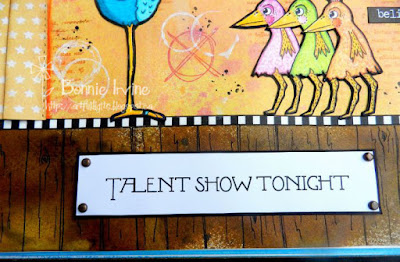 To finish off the page, a Talent Show Tonight sign was printed on white cardstock and matted with black. Four copper brads were added to the corbers before it was adhered to the wooden stage front. The other wording , Believe, is an Idea-ology Big Chat sticker and was added to remind the Lorettas to believe in themselves and their talent :)

Thanks so much for stopping by today. Edgar, the Lorettas, and I are delighted you did that. If you haven't already been following along with the Joggles Art Journal Adventure and Barb's weekly Monday prompts, it's not too late. You can join in at any point and we'd love to have you join our wonderful AJA Facebook group as well. It's an awesome group filled with creative, friendly, and supportive people who share the same enthusiasm for this fun adventure.

Once again, Bonnie, a wonderful scene that makes me laugh and giggle and be so happy to know that I can create wonderful cards or art journals with these amazing characters thanks to seeing how you do it. This journal page is quite detailed, so I can tell it took quite a bit of work on your part to make it happen. (I love how your mind works). Thank you for sharing your wonderful talents with all of us. It means more than you know.

LOL! Ditto Connie - could not have said it better! You continue to amaze me Bonnie!
~ginny
RubberMAD